The LA area has been the home of Viking’s US office for more than 20 years.

‘The Viking Neptune is a ship named for both the furthest planet in our solar system and the god of the sea, and our newest Viking godmother, Nicole Stott, as a NASA astronaut and aquanaut, also has connections to space and the sea. We are grateful for her many contributions to the scientific community and are proud to have her as part of the Viking family,’ Viking Chairman Torstein Hagen said. 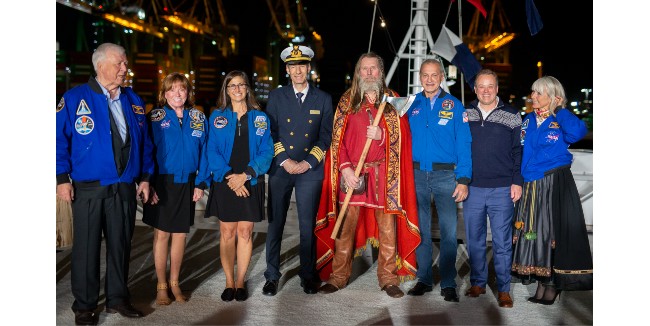 Viking Neptune arrived in Los Angeles early-morning Jan. 8 and departed for Honolulu following the naming ceremony. The ship is sailing Viking’s 2022-23 world cruise, an epic voyage from Fort Lauderdale to London that spans 138 days, 28 countries and 57 ports, with overnight stays at 11 cities.

‘As someone who has been blessed to explore space, the ocean and some of the otherworldly places on our planet, I understand the importance of broadening one’s horizons through travel,’ Stott said. ‘I am very excited for all those who journey around the world on this elegant vessel.’

In keeping with Viking’s naming tradition, during the ceremony Stott used a historic Viking broad axe to cut a ribbon that sent a bottle of Norwegian aquavit smashing on the ship’s hull. Sissel Kyrkjebø, a world-famous soprano and Viking Jupiter’s godmother, handed Stott the axe the singer had used when naming her ship in Beverly Hills in January 2020.

Stott’s experience includes two spaceflights and 104 days living and working in space on the Space Shuttle and the International Space Station. She has performed one space walk and was the first person to fly the robotic arm to capture the free-flying HTV cargo vehicle, the last crew member to fly to and from their ISS mission on a Space Shuttle, and a member of the final flight crew of Space Shuttle Discovery, STS-133. She also is a NASA aquanaut who lived and worked on the Aquarius Undersea Habitat for 18 days.

Stott is the author of ‘Back to Earth: What Life In Space Taught Me About Our Home Planet – And Our Mission To Protect It.’ Also an artist, she painted the first watercolor in space and is a co-founder of the Space for Art Foundation, which unites children through the awe and wonder of space exploration and the healing power of art.

Although identical to Viking’s other 930-passenger ocean ships, Viking Neptune is equipped with a small hydrogen fuel system to test the use of hydrogen power for onboard operations. Viking is using the small system as a trial to determine how hydrogen fuel could be used at a larger scale in future newbuilds.

Viking said the naming ceremony coincided with a record booking week after the company launched its 25th Anniversary Sale on Jan. 1. Through Jan. 31, the sale offers savings, a reduced $25 deposit and up to free international airfare for river, ocean and expedition voyages.