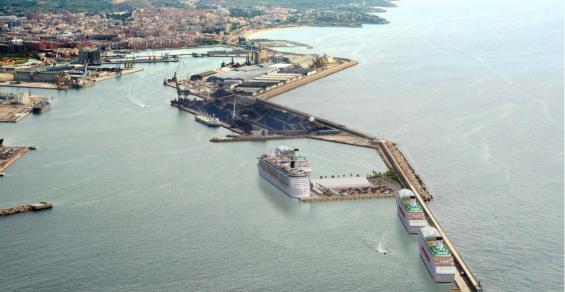 By mid-2021, Port of Tarragona will include Balears Wharf – a new 460mtr long infrastructure with a four-hectare esplanade that will adjoin the Llevant breakwater used for berthing cruise ships.

The new Balears Wharf will take 14 months to complete at a cost of more than €27m euros to enable the handling of the largest cruise ships. Once in operation it will double capacity providing a 700mtr mooring line designed for handling ships on either side (240 and 460 mtr).

Phase one involves the installation of a floating dock. Caisson technology will aim to reduce the project’s environmental impact and shorten its execution time.

In phase two, the seabed will be dredged and levelled out, while the third phase will see the breakwater material laid, followed by levelling for placement of 11 caissons when filled.

After completion of the southern breakwater, the wharf will be filled with rubble using a suction dredger with a cutter that will extract material from the seabed.

Finally, placement of the bollards and defences will begin and surfacing of the wharf and esplanade allowing for the mooring of cruise ships.