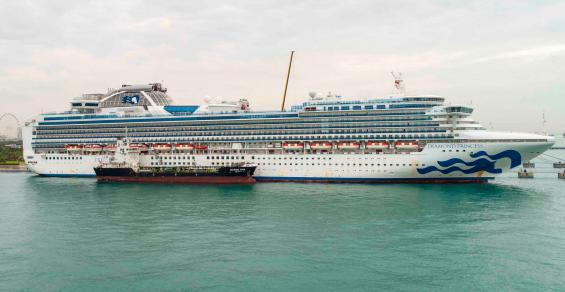 Moreover, close-range and long-range transmission likely contributed similarly to disease progression aboard the ship, with fomite (surface) transmission playing a smaller role, researchers at Harvard and the Illinois Institute of Technology said.

If confirmed, these findings would have ‘major implications for making indoor spaces safer and choosing among a panoply of personal protective gear,’ according to The New York Times, which analyzed the new study.

The current prevailing position is that coronavirus is transmitted primarily through large respiratory droplets within close proximity of infected individuals. However, quantitative information on the relative importance of specific transmission pathways — droplets, aerosols and fomites across short- and long-range distances — remains limited.

So the researchers developed computer modeling to study the ways the virus was transmitted on the quarantined ship.

Their paper — which has not yet been peer-reviewed — shows the long-range transmission of aerosols containing the virus was most likely the dominant mode of COVID-19 spread even though Diamond Princess had a very high ventilation rate and no recirculated air. The long-range and short-range transmission routes had similar contributions to the total number of infected cases, according to the study.

However, aerosol transmission across both short- and long-range distances accounted for more than 70% of disease transmission overall, which is contrary to the prevailing positions on how COVID-19 is spread.

The researchers conluded: ‘Although cruise ships represent unique built environments with high ventilation rates and no air recirculation, these findings underscore the importance of implementing public health measures that target the control of inhalation of small aerosols in addition to ongoing measures targeting control of large droplet and fomite transmission.’

Ventilation systems that replace the air as often as possible, ideally using fresh, outside air, should make indoor spaces healthier.

‘But good ventilation is not enough,’ The New York Times analysis of the new study noted, since Diamond Princess was well-ventilated. ‘So wearing good-quality masks — standard surgical masks, or cloth masks with multiple layers rather than just one — will most likely be needed as well, even in well-ventilated spaces where people are keeping their distance,’ the Times said.