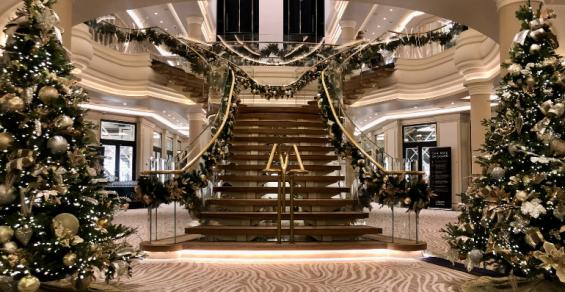 The one-hour documentary goes behind the scenes to show the vessel’s inaugural festive season at sea, as cruise director John Barron leads the ship’s transformation with 70 boxes of Christmas decorations totalling almost £70,000.

As part of the ship’s extravagant seasonal décor, there will be three Christmas trees in the atrium, 15 trees throughout the rest of the ship and a 260ft garland wrapping around the central staircase.

During the holidays, Seven Seas Splendor will have approximately 200lbs of geese, 600lbs of turkeys, 200lbs of ham, 20 different types of cheese and over 38,000 bottles of wine onboard, all included in the fare price. In addition, there are eight varieties of Christmas cookies, 1,000 portions of pumpkin pie and 200 logs of Bûche de Noël on the vessel.

542 crew members will be shown working around the clock to complete the preparations.

‘We are delighted to return to TV screens during primetime Christmas Eve on nationwide television,’ remarked Graham Sadler, MD, Regent Seven Seas Cruises. ‘Our crew have pulled out all the stops, and decked the halls with the most beautiful decorations, to make this a truly magical Christmas voyage for our guests.

‘This is a particularly special festive season for us with Seven Seas Splendor celebrating her first Christmas at sea with guests.’

Experiences on and off the ship

Viewers will see Barron assessing various guest experiences both on and off the ship, including a visit to the private island of Grand Stirrup Cay in the Bahamas.

The programme airs on Christmas Eve at 8pm on Channel 5.