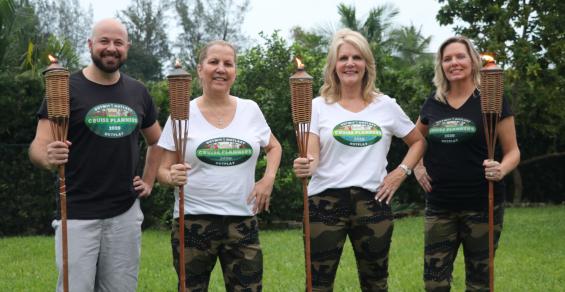 But first each one danced — in creative attire — to a fitting theme song for the year, ‘I Will Survive.’ This also picked up on the forum’s survive and thrive theme.

Here are some takeaways from the wide-ranging discussion moderated by Cruise Planners’ Michelle Fee and Vicky Garcia.

Vicki Freed, SVP sales and trade support & service, Royal Caribbean International: Royal Caribbean hopes it will be able to operate test sailings in January, and 150,000 people have already volunteered for those.

Meanwhile, Freed urged travel advisors baffled about how to make a business plan for 2021 when this year has been so chaotic to ‘set short-term goals for long-term success.’ She suggested starting with a ‘four before 12’ goal — call four people every day before noon.

‘Now is the perfect time. You can say Happy Holidays and, later, Happy New Year,’ Freed said. Connecting like this, live, over the phone, creates loyalty.

Though all long cruises are canceled through November, as per US Centers for Disease Control and Prevention guidelines, ‘We recommend you focus your efforts on generating business in Europe or Alaska for Holland America Line in 2021,’ Sutter said.

Since Canada’s stance on allowing cruises remains to be seen, Sutter was asked if there’s a campaign to amend the US Passenger Vessel Services Act to allow foreign-flag ships to sail domestically. She’s not aware of any such effort.

John Chernesky, SVP North America sales and trade marketing Princess Cruises: Princess is also very focused on Alaska 2021. While cruises themselves will be no more than seven days, add-on land tours are fine and there’s a new 17-day ‘Ultimate Princess Connoisseur’ cruise-tour featuring two nights at each one of the five Princess wilderness lodges.

Princess also expects to sail in Europe in 2021, but there will be strict rules for visiting destinations. ‘Next year is probably going to one of the best times to go because it won’t be as crowded,’ Chernesky said.

Enchanted Princess, delivered three months ago, is scheduled to debut in May and Discovery Princess in November.

Adolfo Perez, SVP sales and trade marketing, Carnival Cruise Line: Carnival hopes to start sailing with Carnival Horizon from PortMiami in March, and then ships from Port Canaveral and Galveston will follow.

The line will be providing webinar training for travel advisors on the new ‘Have Fun, Be Safe’ protocols ‘soon,’ Perez said, adding that Carnival will provide collateral to share with clients. One point is that Fun Hub will enable virtual queuing to help eliminate lines for certain venues.

‘We had planned to have this [training] out weeks ago,’ Perez said. ‘Everybody was so excited with the conditional lift on the [sailing] ban but with that came a slew of things beyond what we as an industry had submitted to the CDC so we’re all working really hard to make sure we get all the clarification on anything that’s not clear through the new order.’

More time to book with FCCs and who pays for testing?

Katina Athanasiou, chief sales officer, Norwegian Cruise Line: NCL is giving travelers who were issued future cruise credits during the first half of this year (through June 30) more time to apply those to a future sailing. Customers will get six more months to book, until June 30, 2021. The ‘sail by’ period remains through 2022.

On COVID testing, NCL will likely require more than one negative test for passengers prior to boarding, with the details about how many days prior still being worked out. Anyone testing positive will be denied boarding and provided the option of an FCC or a refund.

About who pays for the testing, Athanasiou said NCL is working through ‘multiple scenarios and partnerships’ so the full burden of the cost will not have to be borne by the guest.

‘Celebrity Revolution’ will go on — eventually

Dondra Ritzenthaler, SVP sales and trade support & service, Celebrity Cruises: The $500m ‘Celebrity Revolution’ was put on hold during 2020 due to the pandemic. Three ships were completed earlier, with three more to go. One was supposed to be completed this year and one in early 2021.

‘We still 100% plan to do the other three ships,’ Ritzenthaler said, but dates aren’t available yet. This is due to shipyard closures and the backlog of vessels ahead of Celebrity’s.

Ritzenthaler noted the line gets a ‘huge lift’ in the amount it’s able to charge for a ‘revolutionized’ ship.

Michelle Lardizabal, SVP/commercial sales officer, MSC Cruises USA: For the first time, MSC is offering shorter cruises, three- and four-night, in addition to seven-night, starting with MSC Seaside and then Divina, from MSC’s new homeport, Canaveral, and on MSC Armonia from Miami.

All cruises from the US visit Ocean Cay MSC Marine Reserve. On four- and seven-night cruises, Armonia, Divina and Seaside will overnight there.

No details have been released about MSC’s new luxury brand, but it will debut in spring 2023, Lardizabal said.