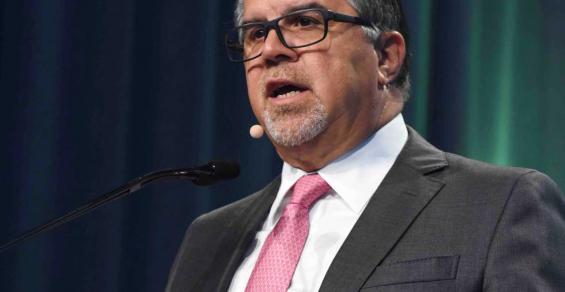 Coronavirus outbreaks on several other cruise lines that have resumed sailing give an 'opportunity to learn,' Norwegian Cruise Line Holdings CEO Frank Del Rio said, adding that ports and the lines have handled these situations 'very, very well.'

‘There’s no way to spin the initial re-emergence of COVID aboard vessels,’ Del Rio said Thursday, ‘but it’s an opportunity to learn from it. This virus teaches us something every day. While it’s disappointing, I’m glad the ports, that the cruise companies that suffered these setbacks handled it very, very well.

‘We haven’t had a repeat of what happened earlier during the pandemic crisis.’

During the initial outbreak, some lines continued sailing and many ports turned ships away, leading to some crisis situations and deaths on board.

As far as the US Centers for Disease Control and Prevention’s stance on cruising, Del Rio said the agency had already received thousands of comments following its request for public input. Comments are open until Sept. 21.

Around this time, Del Rio said, the joint NCLH-Royal Caribbean Group Healthy Sail Panel will be presenting its initial set of recommendations to the CDC, giving the agency ‘a lot of information to ‘comb through and digest.’

Meanwhile, it’s hoped the pandemic will subside to more manageable levels and this will lead to a ‘speedy return to service,’ Del Rio said.

However, he expects it would be second quarter 2021 before the fleet could return in earnest.

To cover ship operating expenses, NCLH’s break-even point is approximately 40% of net revenue. Layering on corporate overhead, that would go up to 60%, CFO Mark Kempa ssid.

The start-up would involve a limited number of ships and Del Rio estimated initial occupancy might be 50% to 60%, not for lack of demand, he said, but to keep healthy distancing on board.

No plans to scrap ships

With a young fleet, NCLH has no plans to retire vessels.

Its oldest ship, Norwegian Spirit, just completed a $150m renovation in mid-February, so that ship is ‘better than new,’ Del Rio said. ‘We love our capacity. We are the smallest of the Big Three so we’re always wanting more, although during this pandemic, I’m glad I am the smallest … We not only have the youngest fleet but we also have nine incredible vessels on order.’

In today’s earnings release, the company signaled possible delays in new ship deliveries ‘which may be prolonged,’ but this was not discussed during the call.