Onorato: MSC Cruises could be up and operating in the Med this month 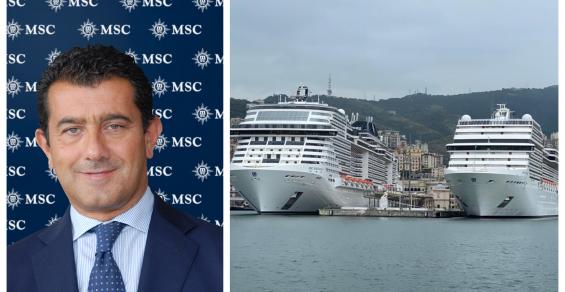 MSC Grandiosa could resume cruise operations round trip from Genoa as early as August 16, 2020; followed by MSC Magnifica from Bari on August 29, if an Italian government decree expected in the coming days gives cruising a green light, MSC Cruises CEO Gianni Onorato confirmed to Seatrade in an exclusive interview Thursday.

‘We have already received approval from Malta and Greece where our initial itineraries will touch and where the authorities have not only reopened their ports to cruising but have also approved our health and safety protocols announced earlier this week,’ he explained.

Onorato also confirmed Italy’s Technical Scientific Committee has given approval for the resumption of cruising from Italy and ‘we have reason to believe the ministerial decree will follow latest by October 10.’

The initial phase of restart sees MSC Grandiosa undertaking  seven day cruises from Genoa, calling at Civitavecchia, Naples, Palermo and Valletta ; whilst MSC Magnifica’s proposed itinerary will offer seven-night cruises from Bari, Italy calling at the Greek ports of Corfu, Katakolon for Olympia, Piraeus for Athens, Trieste in northern Italy and then a return to Bari.

Only Schengen passengers from 26 countries will be able to join the cruises, said Onorato.

However passengers will be able to embark/disembark at any of the Italian cruise ports listed on the West and East Med having undergone the company’s comprehensive preventative measures at each of the embark terminals. These include temperature checks, filling out health questionnaires, and COVID-19 swab testing with results available before boarding. Anyone failing will be denied boarding.

Onorato said MSC Cruises’ new health and safety protocols go above and beyond any other sector of the travel industry. ‘Our aim is to make the ship a bubble as well as give confidence to customers. Each embarkation port will have 15-20 manned medical stations and clearance to board  will be provided within 60-90 minutes of arrival.

The swab testing can be done on the onboard labs or at a shoreside facility which MSC is covering all the costs ‘Our return to the ports will not result in additional costs for the local communities,’ he added.

Onboard Grandiosa 250 cabins will be used for isolating anyone who shows signs of COVID-19 during the cruise.

Each ship will have 3 doctors and 6 nurses on board and 70% occupancy in the initial stages.

‘Our ships will have 100 per cent external fresh air supplied to each guest and crew cabin, and onboard public areas. The fresh air will be sanitised through a UV-C light technology that kills 99.97 per cent of all microbes – bacteria and viruses. There will be no re-circulation of air between cabins or within the ship and the air conditioning system in the ship’s Medical Centre will be sanitised and purified with a dedicated UV light unit equipped with H13 HEPA medical grade filter,’ Onorato added.

Seatrade asked how crew and passengers are reacting to the protocol of only allowing access to the shoreside at ports via company arranged tours/buses.

Anyone who chooses to cruise with us in this reimagined way will be made fully aware before signing off on the cruise of our testing procedures, about wearing masks onboard in confined spaces where social distancing is difficult such as entrance to the theatre and to the elevators and they will be told about the shore excursions and what will happen if someone is tested positive for COVID during the cruise.

Some may say its a  harsh decision to not allow crew to disembark noted Onorato, ‘but they can leave the ship as long as it is in an organised tour where the bus drivers and guides will also be tested, the buses will be fully sanitised, social distancing will be observed and wearing of masks will ensure we are creating a bubble.’

We are strongly recommending they also purchase  for Euros 18 per person per week long cruise a special COVID insurance policy which we have put together with Europ Assistance covering ticket price refund, or an apportion, if tested positive either at embark or during the cruise.

Looking ahead to 2021, Onorato confirmed its newbuilding programme continues as planned with 11 ships on order. He said the only slippage on delivery would be on ships due to come on stream in the coming 12 months.

Seatrade earlier reported MSC Virtuosa, under construction at Chantiers de l’Atlantique and planned for delivery in the fourth quarter this year, is delayed, Onorato said the ship would be delayed by ‘a few months and whilst he could not confirm exact arrival it will be sailing in the fleet in 2021. MSC Seashore, being built at Fincantieri, will now enter service