Odyssey of the Seas, symbol of perseverance, named at Port Everglades 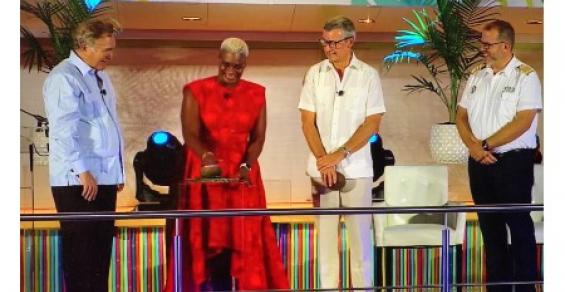 Odyssey of the Seas was officially named Saturday evening at Port Everglades in open-air festivities that highlighted perseverance through the pandemic.

‘Odyssey means a long journey, full of adventures,’ Royal Caribbean International President and CEO Michael Bayley said, noting how the past 20 months saw changes to the construction timeline and uncertainty about when the ship could sail.

‘In many ways, what it took to get Odyssey of the Seas here today is like Royal Caribbean’s journey to get back to cruising,’ Bayley continued. ‘In this last year, the word “odyssey” has meant more than just the name of a ship. It represents the odyssey we’ve experienced together as a cruise line and as an industry.’

Calling Odyssey ‘a very special ship, built during a period of great turmoil and overcoming great odds,’ Royal Caribbean Group Chairman and CEO Richard Fain said: ‘Today, we get to show the world what imagination and determination look like.”

Fain acknowledged the company’s seafarers, ‘the thing that’s always brought our ships to life.’ He thanked EVP Maritime Harri Kulovaara for his shipbuilding genius, SVP Architectural Design Kelly Gonzalez for her awe-inspiring design and Meyer Werft for its partnership over many years.

And Fain called 40-year company veteran Bayley ‘a strong visionary and trailblazer,’ adding: ‘Thank you for being everything the industry and our company needed this year.’

In Erin ‘Bionic’ Brown, cancer survivor, paratriathlete and advocate for people with disabilities, Royal Caribbean found the ideal godmother to represent perseverance. Also, in choosing a Bahamian, the line paid tribute to the Bahamas, its first international destination more than 50 years ago and where it resumed cruising from the Americas in June.

‘In life we are given so many reasons why we decide today is not the day,’ Brown told the crowd in the ship’s pool area, where the festivities took place. ‘I want you to remember Odyssey of the Seas and take those same reasons and turn them into fuel to say “Why not today?”‘

With that — flanked by Fain, Bayley and Odyssey of the Seas Capt. Sindre Borsheim — Brown officially named the ship and pushed a button housed inside a coconut shell that sent a giant bottle of Veuve Clicquot smashing against the hull.