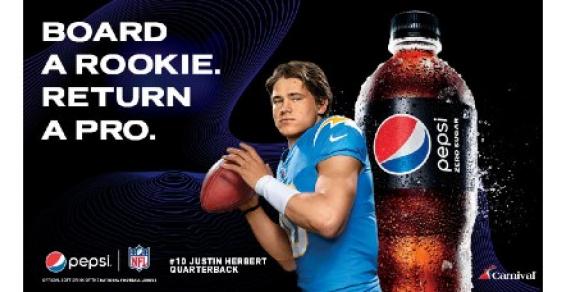 Carnival Cruise Line is offering rookie cruisers the chance to win a free trip in a new promotion with Pepsi and NFL quarterback Justin Herbert.

The star 2020 Pepsi Zero Sugar NFL Rookie of the Year features in Carnival’s ‘Board a Rookie. Return a Pro.’ giveaway.

Encouraging rookie cruisers to embark on a new adventure

‘Being a rookie in any setting can be daunting but exhilarating. That’s why it’s great to be working with Pepsi Zero Sugar to share that feeling with fans by encouraging the next Rookie of the Year and rookie cruisers alike to embark on a new adventure,’ Los Angeles Chargers quarterback Herbert said.

Through Feb. 28, fans can visit PepsiRookieCruise.com to enter the sweepstakes for a chance to win their first cruise getaway, to sail at their leisure anytime over the next 18 months on a Carnival ship.