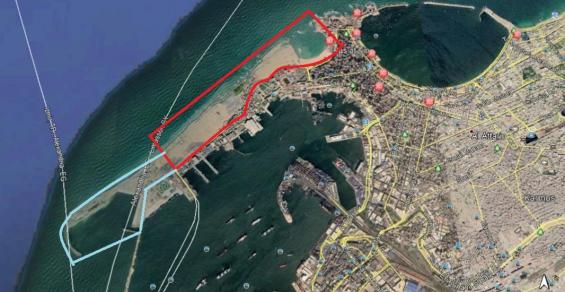 West Alexandria is a new cruise port facility, reclaimed from the Mediterranean and located on the outer end of the Alexandria harbour break water.

Built to originally accommodate Egyptian navy vessels the facility offers a total berthing length of 1,500mtr with a water depth of 15mtr.

It’s attraction is the close proximity to the new Borg El Arab international airport and provides easy access to El Alamein World War 2 battlesite and the rich archeology and historic monuments and museums in Cairo due to a new road infrastructure that is planned to be completed this year.

Under the management of newly formed Abu Kier Ports Co (which also manages 1,100mtr of berthing at Red Sea port of South Safaga with 16m water depth), it is part of  a major development which will include a large archeological attraction featuring pieces from Cleopatra’s Sunken Palace and other underwater attractions.

‘The advantage of this new road is that it is wide and there are no traffic obstructions,’ commented Naggar whose shipping services business has been operating in the Egyptian maritime industries for three generations.

‘Apart from the historic sites and attractions, of interest to cruise line passengers is the New El Alamein city which has been built on 48,000 acres enclosing the battle site of WW2 and is hailed as the new summer capital of Egypt,’ commented Sherine.

El Alamein has many advantages mainly its close proximity to Alexandria, the new airport and its new road links that can allow tourists to be either at El Alamein or visit the Pyramid Parks at Cairo which is also being developed to include the world’s largest museum with thousands of rare artefacts on display, in less than two hours.

‘European cruise visitors of pensionable age may be tempted to consider El Alamein city Med resort as a winter residence where the cost of a day’s full board is probably less than the heating bill in Europe,’ he claimed.