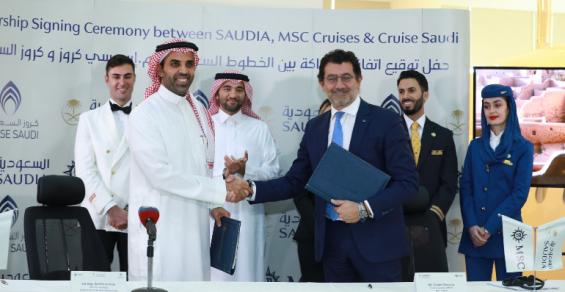 MSC Cruises is offering a fly-cruise package for MSC Bellissima’s seven-night Red Sea sailings with the option available to travel from various international airports to Jeddah, owing to an agreement signed today between the line and SAUDIA.

It means 36,800 seats from Europe and North America will support MSC Cruises’ new Red Sea winter sailing programme scheduled to run from November 2021 to March 2022; according to MSC Cruises, nearly 20,000 new holidaymakers will travel to Saudi Arabia this season as a result.

Commented Onorato, ‘We are proud to partner with SAUDIA, the Kingdom’s national flag carrier, and work towards the same common objectives in support of the further development of tourism in Saudi Arabia by bringing many thousands of international guests to discover this remarkable country, with more to come in future sailing seasons.’

He added, ‘Through this extensive flight programme we are able to make our new cruise offering even more accessible to holidaymakers from Europe and North America and deliver best-in-class experiences.

‘Additionally, data demonstrates that a large percentage of tourists who visit a country for the first time while on a cruise holiday often return for a longer land stay with their families to further explore that country’s culture and other attractions.’

Scenic Group, Silversea Cruises and MSC Cruises are among those to have recently sailed the Red Sea, with the latter offering cruises from Jeddah since July after signing a five-year preferential berthing deal with Cruise Saudi.

‘We are delighted to see SAUDIA and MSC Cruises partnering to serve 20,000 fly and cruise guests to Saudi Arabia for the winter season,’ said Cruise Saudi’s Farooqui. ‘This close cooperation between our national carrier and the world’s third largest cruise line is exactly the kind of partnership which will help Saudi Arabia to become a world-class cruise destination, which is what Cruise Saudi is working to create in line with Vision 2030.’

The seven-night cruises on board MSC Bellissima depart Jeddah at 11pm each Saturday night and include calls at King Abdullah Economic City, Yanbu with an overnight stay for visits to AlUla, followed by a day at sea. The ship then arrives at Aqaba, Jordan for trips to Petra followed by a further day at sea before returning to Jeddah.

SAUDIA has adjusted its flight schedule for Friday night flights from Milan, Rome, Frankfurt, Munich, Paris and Madrid with Saturday morning arrivals in the city, allowing time for passengers to see Jeddah or transfer from the airport to the seaport.

The airline has also adjusted its schedule to make it easier for guests from the USA, the UK, Switzerland and Austria to join the vessel.