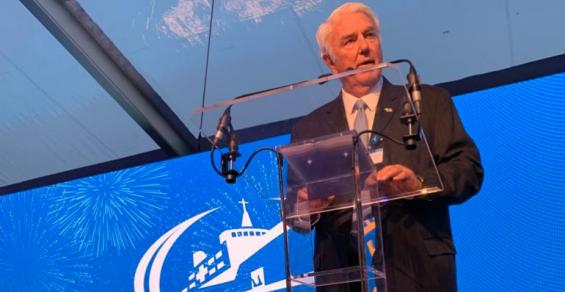 Don Stephens, founder, Mercy Ships has his sights set on a further new build, at the same time as the NGO’s newest hospital ship, Global Mercy, is prepared for deployment in West Africa.

‘Well, I would certainly hope there will be another ship,’ he told Seatrade Cruise News in Rotterdam at the Mercy Ships Global Changemakers event for corporate partners. ‘I’m working toward that but we have to see a lot of things happen.

‘I would love to have an identical sister ship [to Global Mercy] — the same class built to the same plans, because then when it comes to the manning, the crewing, moving people back and forth, it’s familiar. So that would be a big hope for me.’

Asked what the name of the ship could be, he jested, ‘Easy! This is Global Mercy; the next one will be World Mercy.’

Tours of the 37,000gt ship have been taking place at Rotterdam port since February 26 with 11,000 individuals having embarked so far and people across 111 countries participating in a virtual online tour. Onboard visits conclude March 14, a day before Global Mercy moves to Tenerife for further works. Its first deployment will be to Senegal.

‘This ship is bigger and better than I ever imagined, she is amazing,’ continued Stephens. ‘When we think of her bringing hope and healing to both coasts of the African continent, I think everyone will rejoice that we have such an incredible tool – hopefully she will serve for decades.’

The ship has a 50-year lifespan and was built at Tianjin Xingang Shipyard, China at a cost of $200m.

Stephens went on to tell attendees at the Global Changemakers event, ‘Global Mercy isn’t just the largest vessel we’ve ever had, it’s the first purpose-built hospital ship … This is different. There’s not another ship like it in the world.’

He added, ‘All of you here are leaders in business & philanthropy…your return and your investment is immeasurable. The return…is in hope and healing that will have a multigenerational impact.’

Mercy Ships is the official nonprofit partner of Seatrade Cruise.