After smashing the Champagne she changed into a red latex bodysuit and fringed chaps to perform hit after hit — ‘California Gurls,’ ‘Firework,’ ‘Roar’ and many more — on the Prima Theater stage that had sprouted giant red and white mushrooms. 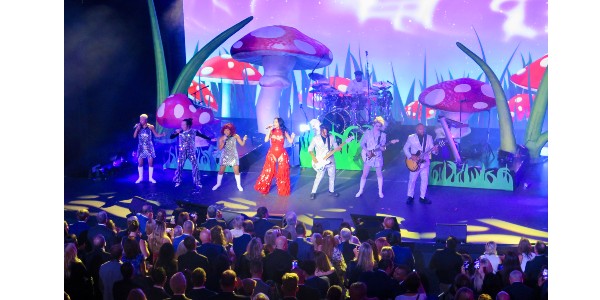 The night before Perry and Orlando Bloom celebrated their 2-year-old daughter’s Daisy’s birthday on the ship — ‘One of my best family birthdays ever,’ Perry said — and they will be cruising with Norwegian Prima as it sets off to Ireland. 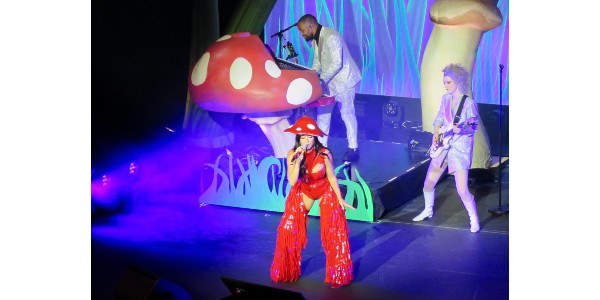 Her lengthy set capped a rich christening program that laced humorous moments with emotional ones.

NCL paid a moving tribute its founder and one of the fathers of modern cruising, the late Knut Kloster.

‘For my father, like generations before him, the ocean represented opportunity … and cruising brought people together,’ said his daughter, Kristin Kloster Aasen, to a standing ovation.

The show opened with a funny video of NCL President and CEO Harry  Sommer ‘helping’ the crew get Norwegian Prima ready — hanging a painting (upside down), making a stateroom bed (sort of) and mixing a cocktail (to comic effect). Sommer also invited crew to the stage as the audience cheered.

‘There’s a lot to celebrate,’ Del Rio said as he spoke of the ‘wonderful, almost surreal feeling to see so many familiar faces and lots of new ones’ in the audience as the cruise industry emerges from ‘one of the most difficult periods we’ll ever face in our lifetime.’

Everyone present faced uncertainty but had ‘one thing in common: You never, ever gave up,’ Del Rio said. ‘After this experience, I hope we all realize how much we need each other.’

Del Rio talked about the crew being grounded for 500 days when the company  had ‘no revenue and them not earning their livelihoods. Every day that would break my heart,’ he said.

But now ‘We’re back.’ The fleet is in service and three new ships are coming in 2023: Norwegian Viva, Oceania Cruises’ Vista and Regent Seven Seas Cruises’ Seven Seas Grandeur.

Those and more spell $9bn in new tonnage for NCLH and ‘We’ll grow in a sustainable manner,’ Del Rio said. ‘Everyone’s going to win. That’s why we’re here. To be profitable and provide jobs …

‘… Today is the onset to a bright future as the ‘public’s pent-up demand for travel coincides with our growth.’