Home for the holidays with Hallmark Christmas movie on American Duchess 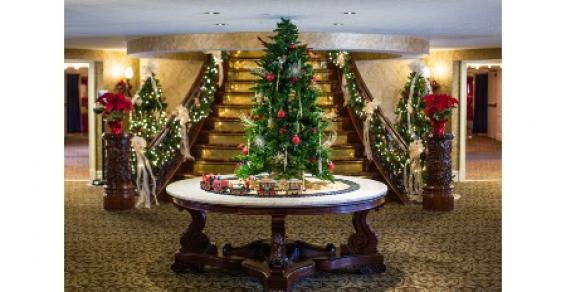 This coming week sees the premiere of 'Every Time A Bell Rings,' a Hallmark Channel Christmas movie set in Natchez, Mississippi, with scenes aboard American Queen Voyages' American Duchess.

The plot involves three estranged sisters who reunite in their hometown of Natchez and discover their late father planned one last scavenger hunt for them to find the family’s wishing bell, an annual holiday tradition. As they search for clues their bond is rekindled. One of the clues is hidden aboard American Duchess.

What’s more authentic to Natchez than a paddlewheeler?

A Southerner whose hit ‘Christmas on the Bayou’ for Lifetime in 2013 sparked a specialization in family-friendly Christmas movies, Lewis is passionate about setting his stories in real, rather than fictional, towns.

‘There’s so much beauty, so much to explore’ in states like Louisiana and Mississippi, he said. Standing on the bluff while scouting locations in Natchez, ‘I saw this beautiful paddlewheel boat.’ A call to Mayor Dan Gibson — who had enthusiastically welcomed the resumption of cruises in March — made the connection with American Queen Voyages.

Filming on American Duchess took place in September, with the boat decked out in Christmas trees, wreaths and poinsettas, reminiscent of the adornment for the line’s festive holiday cruises.

Everything took place under strict COVID-19 protocols; besides the film crew’s own, American Queen Voyages requires 100% vaccination plus a PCR test prior to embarking.

Catching glimpses of the four-hour shoot, passengers got into an early holiday spirit. And, during future calls at Natchez, a regular stop for the line, travelers can follow a self-guided tour of the movie’s locations.

Before filming on American Empress, the cast met for a biscuit-making class at Natchezian Regina Charboneau’s cooking school, an experience American Queen Voyages passengers can book as a premium tour. Charboneau is a long-time friend of the line.

Nov. 14 will see a red carpet premiere in Natchez with stars like Erin Cahill and Wes Brown in a fundraiser for the Humane Society and the movie broadcast on a giant screen, free, for residents. Starting Nov. 18, ‘Every Time A Bell Rings’ will air on the Hallmark Movies Now app for two weeks, then on Hallmark Movies & Mysteries in December.

Lewis said he’d ‘absolutely’ love to film another movie featuring an American Queen Voyages paddlewheeler with more scenes ‘if not even an entire film. There’s so much production value.’

The line has limited availability on 2021 holiday season sailings including nine-day Memphis to New Orleans trips on American Queen, American Duchess and the new American Countess.

A pair of ‘Creole Christmas’ cruises, Memphis to New Orleans, bring the Cajun and Creole cultures to life on board American Queen and Duchess. Passengers will have the opportunity to participate in gingerbread decorating, ornament making and caroling.

Weeklong holiday cruises in the Pacific Northwest sail round-trip Vancouver, Washington (across the river from Portland, Oregon), Nov. 16, Dec. 1 and 6 on American Empress.

And, back in the heartland, a New Year’s celebration with sounds of the South, including an on-board gala with music, dancing and a champagne toast on New Year’s Eve, are available Dec. 26 on American Queen and American Duchess.