Holland America’s Rotterdam christened by royalty in its namesake city

The festivities took place Monday in Rotterdam, where Holland America was founded.

Upon arrival, Princess Margriet was welcomed at the gangway with a floral bouquet presented by Nora van Dijk, 7, the daughter of Nathalie van Dijk, who has been with Holland America 15 years, most recently as a business development representative in the Rotterdam office. Accompanying the godmother were officials including Carnival Corp. President and CEO Arnold Donald, Holland America Group President Jan Swartz, Rotterdam Capt. Werner Timmers, Rotterdam Lord Mayor Ahmed Aboutaleb and Mariner Ambassadors David and Gisela Gere.

‘When Rotterdam was delivered in 2021 we postponed its naming ceremony so we could hold it in Rotterdam because there’s no better place to name a ship than in the city it was named after,’ HAL President Gus Antorcha said. ‘After a challenging couple of years, we are excited to celebrate this memorable moment in our company’s history.’

Following the ceremony, a gala luncheon was held onboard. The festivities were to continue into the evening with a gala dinner and the opportunity for guests to pour champagne over the ship’s bell. The blessing of the bell is a Holland America Line tradition to welcome a new ship. 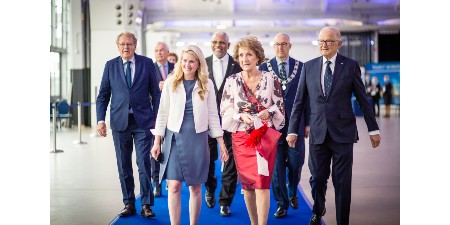 The Geres were selected as Mariner ambassadors to honor Holland America’s appreciation of its loyal guests. They first sailed in 1988 aboard Rotterdam V and have spent nearly 2,500 days on HAL ships, including several cruises on Rotterdam VI.

Holland America Line’s connection to The House of Orange goes back nearly a century to Prince Hendrik launching Statendam III in 1929. Since then, members of the Dutch royal family have launched 11 more HAL vessels over the years, including Princess Margriet who also named Prinsendam (1972), Nieuw Amsterdam II (1983), Rotterdam VI (1997) and Oosterdam (2003).

Additional royal godmothers include Queen Máxima, who named Koningsdam in 2016 and Nieuw Amsterdam in 2010. Then-Queen Beatrix served as Eurodam’s godmother in 2008. Rotterdam V was launched in 1958 by Queen Juliana. Then-Princess Beatrix named Statendam IV in 1957 and Prinses Margriet in 1960. Nieuw Amsterdam II was launched by Queen Wilhelmina in 1937. 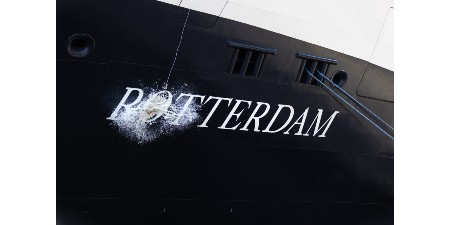 Rotterdam is the third vessel in Pinnacle class and the seventh ship to bear the name for Holland America Line.

Rotterdam’s seven-day naming celebration cruise departed May 29 from Amsterdam and will continue to the Norwegian Fjords. Following this, the ship will sail from Amsterdam on seven- and 14-day Norway cruises, as well as explorations of Scandinavia, Iceland and the Northern Isles.

On Oct. 15, 1872 , Rotterdam I — the first Holland America ship — embarked on its maiden voyage from Rotterdam to New York. Exactly 150 years later, on Oct. 15, 2022, Rotterdam VII will depart Rotterdam once again as the line recreates this historic 150th anniversary crossing with calls at Plymouth, England; New York and Fort Lauderdale. The ship will then spend the season in the Caribbean, based from Port Everglades.