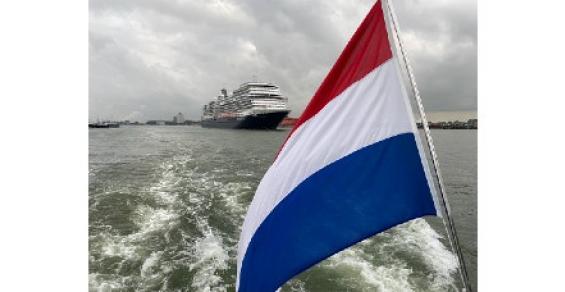 Holland America Line scheduled Rotterdam's christening ceremony for May 20 in its namesake city.

As previously reported, Princess Margriet of the Netherlands will serve as the godmother.

A special seven-day ‘Rotterdam Naming Celebration’ cruise will sail round-trip from Amsterdam, departing May 29 and visiting Kristiansand, Stavanger and Flåm, Norway, with scenic cruising in Sognefjord.

‘Our new Rotterdam is a spectacular ship, and we are thrilled to have its naming ceremony scheduled with a celebratory cruise that allows our guests to join the festivities and officially welcome her to the fleet,’ HAL President Gus Antorcha said.

When the ship arrives at Rotterdam May 30, a private ceremony will be held for invited guests that will be broadcast throughout onboard. Special events are planned during the voyage, including a celebratory gala dinner and an opportunity to participate in the blessing of the ship’s bell, along with surprises and commemorative gifts.

The cruise is priced starting at $1,399, while optional ‘Have It All’ premium pricing that includes shore excursions, beverages, specialty dining and Wi-Fi starts at $1,749. Taxes, fees and port expenses are additional.

Rotterdam was delivered July 30 and sailed a trans-Atlantic first voyage before its inaugural Caribbean season based at Port Everglades. Beginning in May, the ship will explore Europe, heading to Norway, the Baltic, British Isles and Iceland, on round-trip cruises from Amsterdam .