Fred. Olsen ships move from Firth of Forth to Babcock’s Rosyth facilites 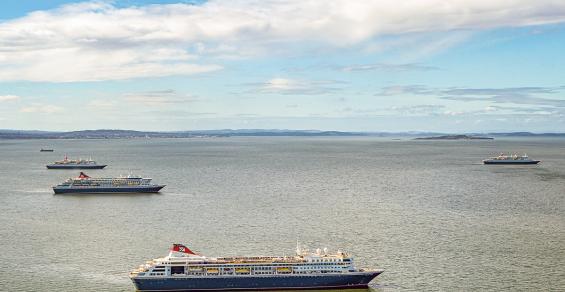 Starting today, Fred. Olsen Cruise Lines is moving four of its ships from Scotland’s Firth of Forth to Babcock’s Rosyth facilities to better support the ships’ on board maintenance after a further pause in operations was announced last week.

Black Watch moved to the new location on May 28, Boudicca is set to follow on May 29, and Balmoral and Braemar will make the journey sometime in the first week of June. All four ships had been in warm lay-up since March 13 and recommencing of sailing anticipated for late May.

‘When we paused our operations back in March, we had an initial date of May 23 to resume cruising again’, says Peter Deer, managing director at Fred. Olsen. ‘Unfortunately, this has not been possible, and so we have had to reconsider the running of our four ships until such a time that we can set sail once again.

‘Moving our ships to Babcock’s Rosyth facilities and having them alongside in port allows us to run a more efficient operation, including the general maintenance of the ships, crew changes and refuse collection’.

Deer, who has not made any further annoucement on when the ships may sail, thanked the Forth Ports for ‘all of their support over the past two months’.

Fred. Olsen is notifying guests booked onto cancelled sailings at least 30 days ahead of the planned departure date.