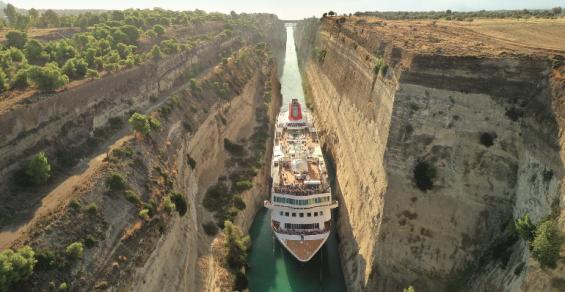 Fred. Olsen Cruise Lines’ Braemar will sail Greece’s Corinth Canal in May 2023 in a repeat of the line’s record breaking feat.

In 2019, the moderately sized 22.52-metre-wide vessel became the largest ship to traverse the 6.4-kilometre-long canal, which is 24 metres wide at its narrowest point. The sailing was sold out, becoming Fred. Olsen Cruise Lines’ highest rated cruise for itinerary satisfaction based on passenger feedback.

‘Here, Braemar will showcase exactly what we mean when we say ‘smaller is better,’ commented Clare Ward, director of product and customer service, Fred. Olsen Cruise Lines, ‘This cruise offers a sailing experience like no other.’

She added, ‘Explorations ashore will uncover the impressive sandstone architecture and the imposing Palace of the Grand Masters in Rhodes, the Roman Odeum in Patras, and the chance to explore the site of Ancient Olympia, to name just some of the memorable experiences.

Braemar’s 2019 transit of the Corinth Canal can be viewed on Fred. Olsen Cruise Lines’ YouTube channel.