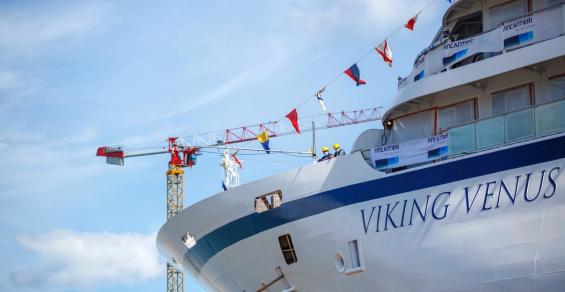 Viking Venus, the seventh ocean cruise ship Fincantieri is building for Viking, was floated out today at the Ancona shipyard.

Interior fittings will now begin, leading to the delivery, scheduled in 2021.

The ship has energy-efficient engines and optimized hydrodynamics and hull to reduce fuel consumption.

After starting its partnership with Viking in 2012 with an order for two ships, Fincantieri has stretched the business to 20 units, including a pair of expedition ships at its Vard subsidiary and options. According to the builder, this is a record stretch of cruise orders for a single brand.

Viking Star was delivered by the Marghera yard in 2015, followed by Viking Sea, Viking Sky, Viking Sun, Viking Orion and Viking Jupiter, all handed over by Ancona from 2016 through 2019.