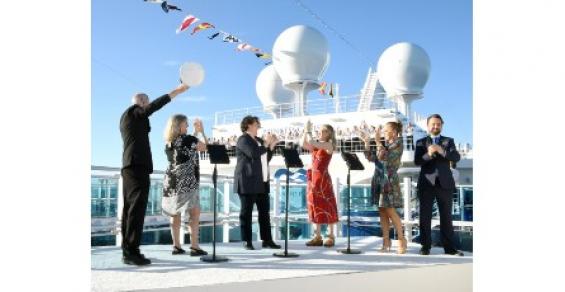 Princess Cruises melded live cameos with a taped production for the naming of Enchanted Princess by three women of The Explorers Club.

Ocean stewards Capt. Lynn Danaher, Dr. Vicki Ferrini and Jenifer Austin served as godmothers in the ‘Our World, Enchanted’ taped production, smashing a bottle of Taittinger Champagne on the hull. 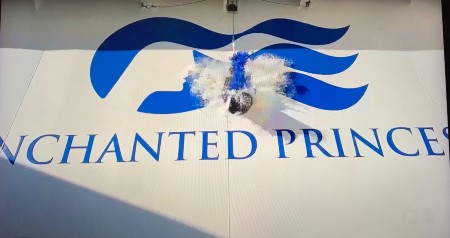 They were accompanied by Commodore Nick Nash, Princess Cruises Celebrations Ambassador Jill Whelan and Cruise Director Dan Falconer, who also hosted live segments before and after.

‘Our World, Enchanted’ took viewers to Fincantieri’s Monfalcone shipyard for a look at Enchanted’s construction — it was the 100th cruise ship built by Fincantieri — and showed on-board features like entertainment, dining, shopping and The Sanctuary. Padgett talked about OceanMedallion and MedallionNet Wi-Fi, which he masterminded in his role as chief experience and innovation officer for Carnival Corp.

The production also chronicled Princess milestones from the first 1965 sailing of Princess Patricia to Mexico, through ‘The Love Boat’s’ 1976 premiere and many other highlights. A retrospective also featured some of the line’s many noted godmothers, including Sophia Loren, Audrey Hepburn, Princess Diana and the Duchess of Cambridge Kate Middleton, to name a few.

The festivities are now available to watch on demand here.