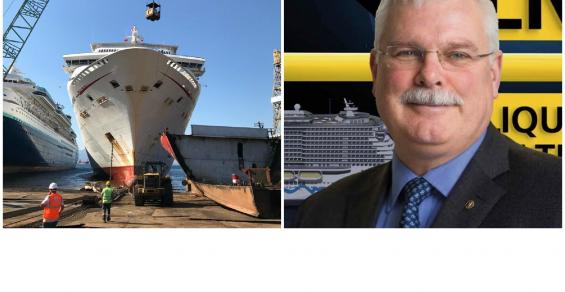 The company reached out to environmental nonprofit Bellona Foundation – a lead partner in the NGO Shipbreaking Platform — and ship recycling experts Sea2Cradle to guide its selection of Turkey’s Ege Celik and Simsekler to responsibly dismantle and recycle the pair of Fun Ships.

EU-flag ships and non-EU-flag ships operating between EU countries may be recycled only in safe and sound ship recycling facilities included in the European List. In the case of Carnival Fantasy, registered in Panama, and the Bahamas-flagged Carnival Inspiration, neither applied but Carnival Corp. took into account the Basel Convention, which controls the transboundary movements of hazardous wastes and their disposal.

‘We wanted to be sure the shipyards met labor standards and handled hazardous wastes properly,’ Strang told Seatrade Cruise News.

It has been years since Carnival Corp. directly sold a ship to the breakers, he added — perhaps Costa Concordia was the last but that was a highly unusual circumstance — so the company didn’t have a body of in-house knowledge to fall back on. Nor could personnel go to inspect yards due to COVID-19 travel restrictions.

Brokers handled the actual sales, and Sea2Cradle was engaged to ensure optimal compliance with national and international environmental standards, including a complete inventory of hazardous and regulated materials and the procedures for safely removing and processing those in an environmentally friendly way.

This Netherlands-based company had been on Carnival ships previously to conduct hazardous materials inventories.

Carnival Fantasy and Inspiration will be stripped of machinery, electronic equipment, glass, wood and other materials that can be directly upcycled for reuse in new ships, used in ship repair or repurposed for other applications. Steel and metal scraps will be salvaged and recycled for direct use or sent to the mill for producing other products and goods.

It can take up to nine months to recycle a cruise ship.

Strang said buyers pay for the weight of hull materials. In addition to the steel, there may be valuable metals like copper and aluminum. And ships that have been updated might have recently installed components like scrubbers and advanced wastewater treatment systems that can be reused.

Items removed by the cruise operator prior to delivery to the breakers typically include artwork and memorabilia, leased equipment like casino items and goods that are the property of concessionaires. Other items a line may keep to reuse could be taken off, too, but those would be weighed against storage costs.

The company will have its supervisors present at the yard during the entire recycling process to ensure the plan is adhered to and that all health, safety and environmental measures are followed, according to Wouter Rozenveld, director, Sea2Cradle. ‘We will also see to it that non-recyclable materials are being disposed of and treated properly, and we will remain on-site until the last piece of steel is brought to the smelter to produce new products,’ he said.

Sea2Cradle estimates a significant percentage of materials from both vessels will be reused, reclaimed or recycled.

Forty-one yards are currently on the European List for safe and sound recycling. That sounds like considerable choice for Carnival Corp. but Strang said factors include whether the facility is big enough and if it has space available since, currently, a number of offshore supply vessels and container ships await scrapping.

Another Carnival vessel, Costa Victoria, was sold to San Giorgio del Porto, a Genoa yard that is also certified for safe and environmentally sound ship recycling. It hasn’t been announced whether Costa Victoria will be scrapped or perhaps used as an accommodation vessel for ships undergoing work at sister company Chantier Naval Marseille.

Past Carnival ships — years back — may have ended up on the beaches of Alang in India or in Bangladesh after being sold on by other companies. But Strang was not aware of ‘any reputable cruise lines’ recently dispatching tonnage directly to Alang, a passenger ship graveyard before the move to regulate safe recycling. He noted, however, the NGO Shipbreaking Platform was working with a number of yards in India to raise standards.

‘Dismantling a cruise ship is complex, involving many components for reuse, recycling and waste for [disposal],’ said Sigurd Enge, Bellona Foundation head of shipping & Arctic issues. ‘We are grateful for Carnival Corporation’s commitment to performing the recycling in a proper way to avoid pollution and to safeguard the environment.’

Part of a sustainable cruise industry

As Bill Burke, Carnival Corp.’s chief maritime officer, sees it, the proper disposal of a ship goes along with limiting environmental impact during its lifetime in contributing to a sustainable cruise industry.

Carnival Corp. has announced the exit of 11 ships, in addition to the four disclosed prior to fiscal 2020. Besides Fantasy, Inspiration and Costa Victoria, the 11 include P&O Cruises’ Oceana, sold to Greek ropax operator Seajets, Costa neoRomantica to Celestyal Cruises, Holland America Line’s Amsterdam and Rotterdam to Fred. Olsen Cruise Lines and Maasdam and Veendam to an undisclosed buyer.

In addition, Carnival Fascination and Carnival Imagination are moving to a long-term lay-up status, with no specific timeline identified for a return to operation.