‘Traditional customs can continue and we can bring the work to future generations because of cruise,’ he stated. Approximately 60% of the business’ income comes from cruise.

Located less than one-hour from Leknes port, the village ‘features handicrafts and art, combined with Lofoten coastal history,’ according Vegeir Selboe, marketing manager, Destination Lofoten. He continued, ‘This is more of a “meet the locals and artists” experience rather than a museum, as we meet the blacksmith himself and see his life’s work. Passengers can look at his art… It’s a very popular group destination in Lofoten and a popular cruise activity. It’s a very “real” experience…’

‘There is turbulence in Lofoten because of cruise but the anger is misplaced,’ continued the spokesperson. ‘Our infrastructure has not been modernised and it all needs to be upgraded… Camper vans are more to blame, but people see cruise ships and do not differentiate.’

He went on to add that ‘there are serious thoughts about expanding the harbour’ with hopes of cooperating with fishing vessels in Lofoten to push the project through. ‘It’s a really good deep water harbour but it needs development in two places… it would divide and spread out cruise traffic.’

The Blacksmith is working to form a collective that would see a café, glassblowing business and a hand sewn clothing and handicrafts shop come together.

Added The Blacksmith’s spokesperson, ‘We’re looking to expand out into the sea a bit and have additional stuff there. We’re trying to make our product a lot better.’

He said, ‘We can supplement our product by bringing in additional people – a collective around here made up of stand alone businesses.’

Currently in Sund, there is capacity for three to four large buses, which he tells cruise line representatives is ‘ok – but no more.’ A meeting will be held to assess whether the parking can be expanded: ‘Hopefully, in a couple of years we will see results. When it’s a lot of buses it gets crowded really fast.’

‘A picture postcard of Norway’

Shortly before arriving at Sund, the fam travelled to the Norwegian fishing village of Å. Comprising 75 inhabitants and a single grocery shop, it is one hour from Leknes Cruise Port and ‘a highlight, a picture postcard of Norway,’ according to Sylviane de Tracy, director, research & development, Ponant which calls at nearby Reine port. ‘Passengers see how people used to live, the fish museum and have free time to take pictures,’ she added.

The group were shown the interior of a house – or rorbuer – once owned by a local fisherman that is now under the ownership of the Norwegian Fishing Museum. Similar houses in the village have since been converted into rental properties for tourists after being left empty in the mid-20th century.

After exploring the historic boat house on site, the group headed for the 1844-built village bakery where pastries are prepared using traditional fired ovens. 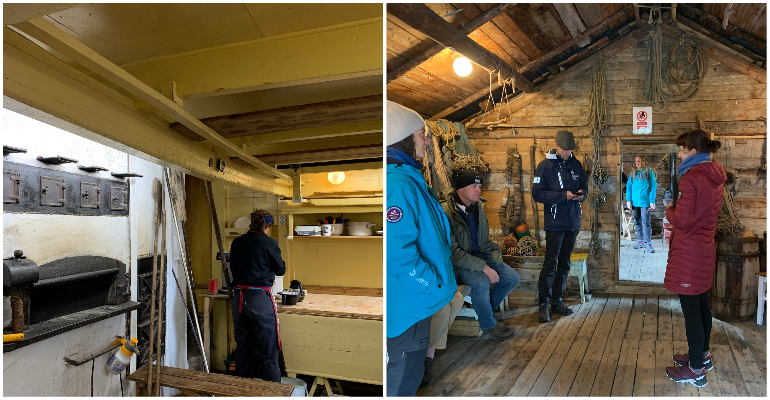 The went on to enter a former cod liver oil factory, whose product once featured as a component in paint used to decorate local houses. Cruise passengers are today invited to sample cod liver oil made in the region as part of the museum tour, and passengers arriving early in the season can spot cod hung out to dry to produce Nordic delicacy, stock fish.

A trip to the Museum of Telecommunication (Telemuseet) 3km away can be added to the journey. Due to limited parking facilities there, it caters to small groups of around 10 pax at a time.

An additional museum visit on August 31 saw history, archaeology and entertainment merge in a trip to Lofotr Vikingmuseum in the village of Borg.

Lofoten has a rich Viking heritage and the site of the museum is built close to where the foundations of a long-house were discovered, believed to have been the former seat of a Viking chieftain.

After a tour of the museum – part of the Museum Nord consortium – fam trip members ate and toasted with honey mead while museum staff dressed in Viking-style attire performed with instruments. A 30-minute Viking boat ride can be offered to cruise passengers paying the venue a visit. 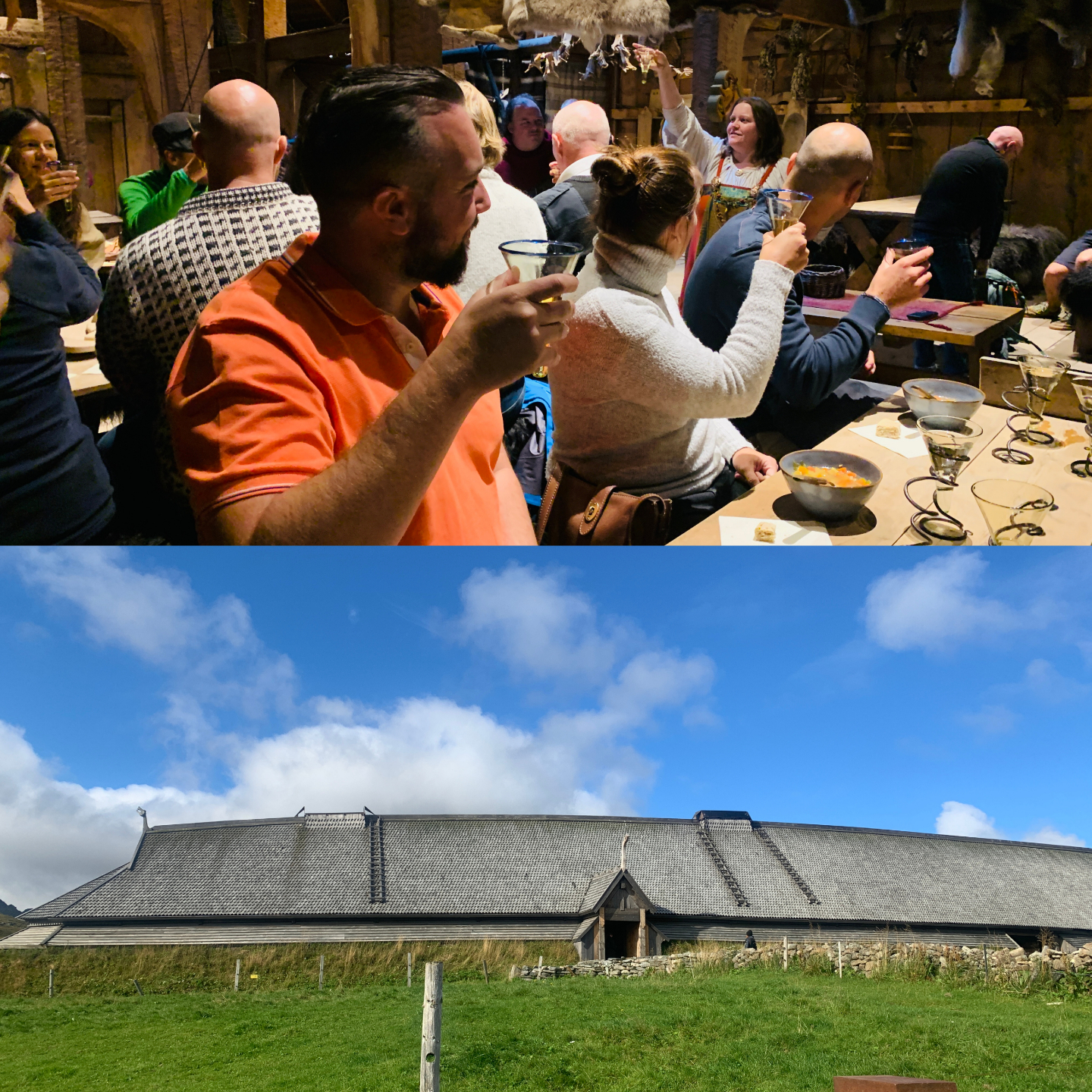 In contrast, Aaland Farm 20km from Leknes provides passengers with a tranquil setting in which to sample cheese from the region and discover the fruits of the farm’s herb garden open to cruise passengers year-round. Lofoten Art Gallery (Galleri Lofoten) provided a similarly calm setting and is located a stone’s throw from art gallery The KaviarFactory housing the artworks of the world renowned Ai Weiwei. 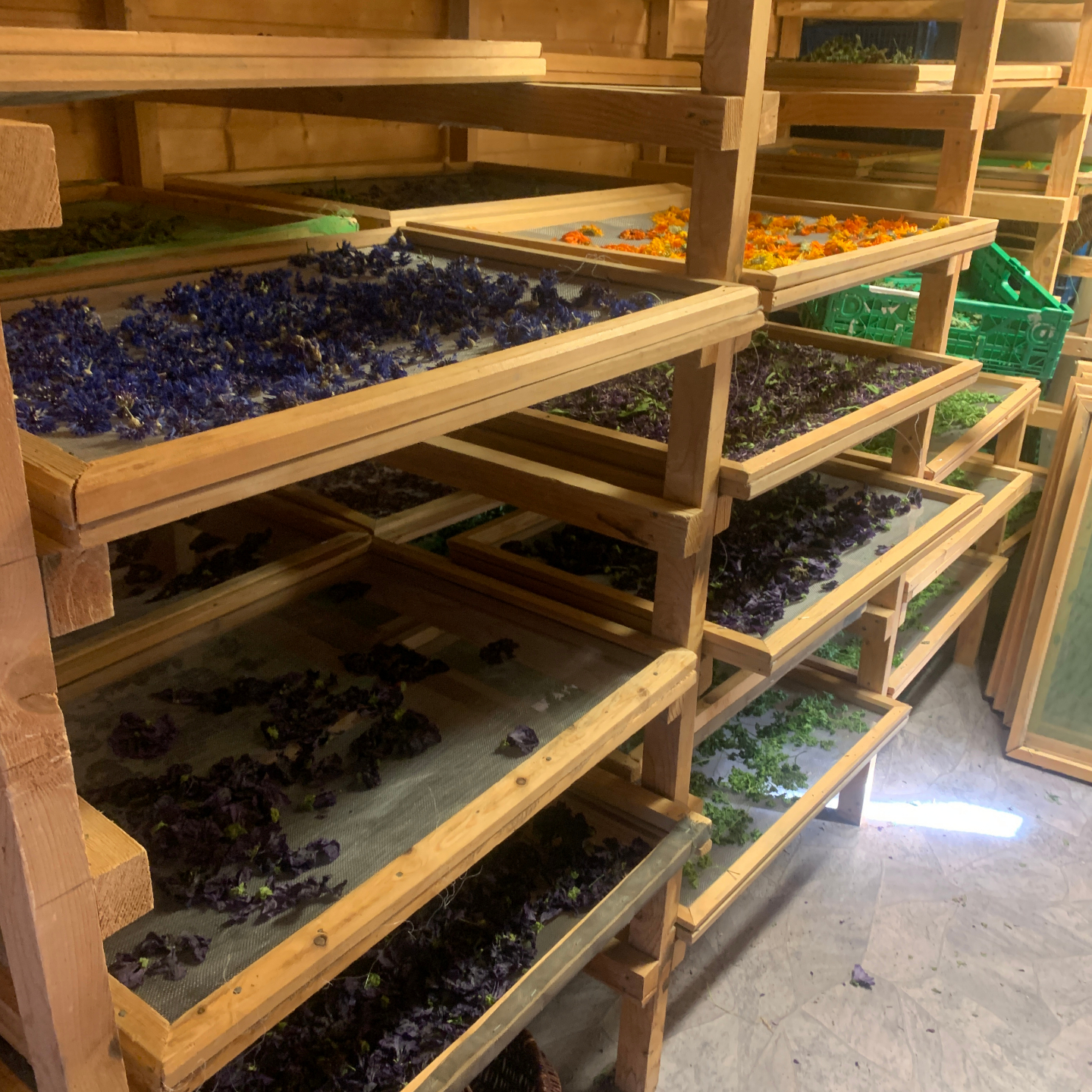 A less than 30-minute rib boat ride from Svolvær bought fam trip participants to the picturesque island of Skrova and the location of restaurant Heimbtygga, whose building is 200 years old. Its menu is crafted around the freshest ingredients available and passengers have the choice of selecting cuisine typical of the region, such as cod tongue and stock fish.

Rounding up the day’s events was a brief stint in Magic Ice Lofoten, a bar and art gallery moulded together, and where temperatures are kept below zero. Cruise line representatives observed its slide made of ice, as well as its ice sculptures. With all visitors required to wear a thick cape and gloves to enter, the artworks can be observed by passengers while sampling one of the venue’s signature cocktails fashioned from a glass made of ice. 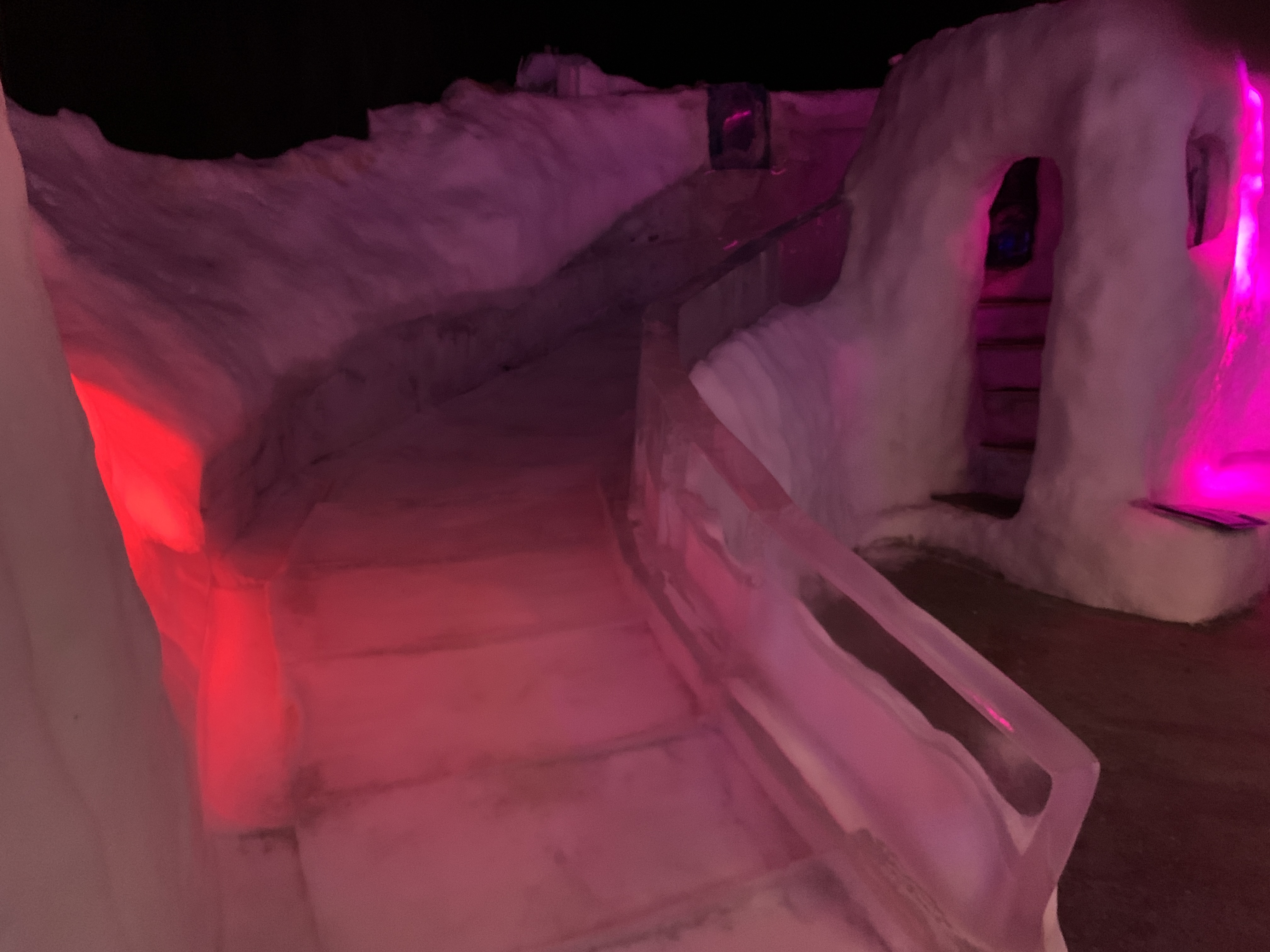 A new and interactive National Museum for Coastal History in Norway is launching 2025 that will encompass an acquarium, museum and gallery, while Ai Weiwei’s exhibition on refugees is available to October 2023.

There are seven art galleries in ‘Arctic Venice’ Henningsvaer in total, with the fishing town popular with hikers and mountain climbers. Other nearby attractions include: Lofoten beach camp, offering surfing lessons with support for those with disabilities, as well as lessons introducing arctic swimming; Game of Thrones filming locations and Haukland Beach, voted one of the best in the world by Lonely Planet. 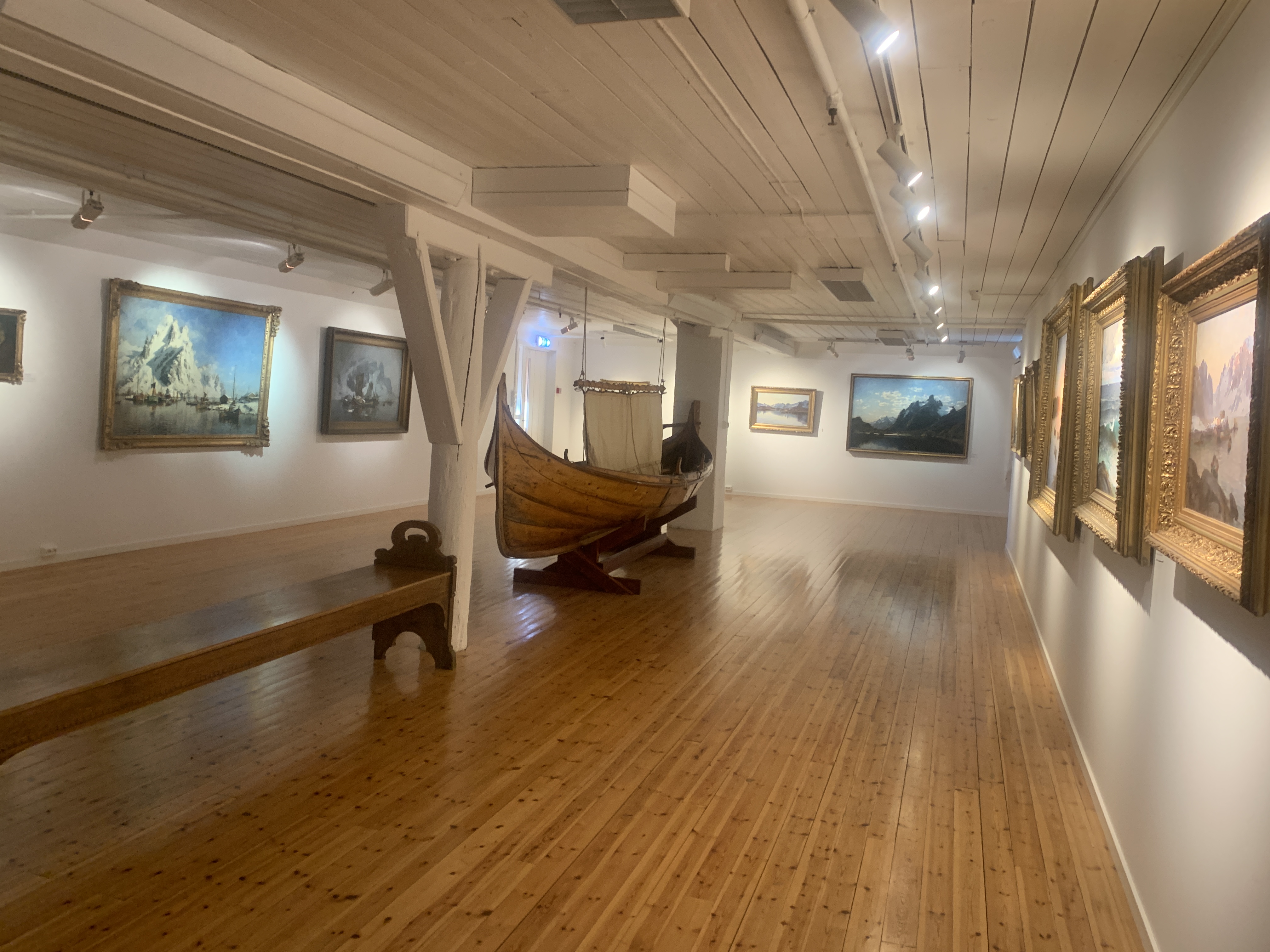 Day trips to Lofoten Cathedral are also available to large volumes of cruise passengers, with capacity for 3,400 people inside.

Cruise Norway is exhibiting at Seatrade Cruise Med in Málaga this week at stand #154. Its next fam trip to the Norwegian fjords takes place next week.