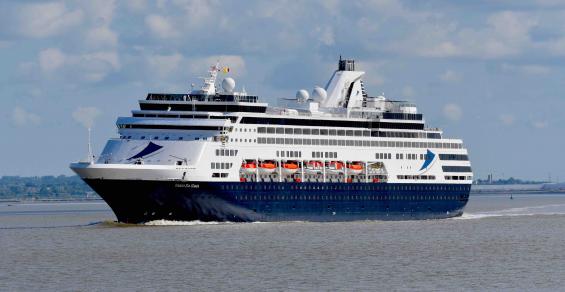 Cruise & Maritime Voyages, which operates six ships and was due to expand with two more next year, was placed into administration today.

The administrators said the Essex-based line had ceased trading immediately along with its sales offices in Australia, France, the United States and TransOcean Kreuzfahrten in Germany.

The line, which chalked up its 10th year of tradiing in 2019, operated older ships at value pricing and was known for its theme cruises.

After record 2019, unable to secure financing

CEO Christian Verhounig told media CMV had a record 2019, had sold nearly 90% of its 2020 inventory prior to the COVID-19 onset and had solid bookings for 2021 but could not obtain the financing to get through the pandemic.

Five ships — Astoria, Astor, Columbus and Vasco da Gama at Tilbury and Marco Polo at Bristol — were detained last month by the Maritime and Coastguard Agency after surveyors found expired and invalid seafarers employment agreements, late payment of wages and crews on board for more than 12 months. Magellan was not detained after no significant deficiencies were found.

At the time, CMV said crew wages were immediately addressed and pointed to the challenges of repatriating seafarers due to travel restrictions. More recently, the International Transport Workers’ Federation had been assisting in repatriating of hundreds of the crew.

In mid-June CMV said it was in discussion with potential lenders and investors after failing to secure a £25m loan from Barclays Bank under a COVID-19 business interruption loan scheme.

CMV had been scheduled to take delivery of P&O Australia’s Pacific Dawn and Pacific Ariar (to be renamed Amy Johnson and Ida Pfeiffer) in Singapore next March and May, respectively, increasing fleet capacity to 9,000 berths and passenger capacity by 30% in 2021.

The CMV news follows the June 22 announcement that Cruises Investment Holding and Royal Caribbean Group filed to reorganize their Pullmantur Cruceros joint venture under the terms of Spanish insolvency laws.