Remarked Agnes Brochet, director of strategic pricing & itinerary planning at Silversea Cruises during the ‘The future of cruising to Svalbard’ workshop, ‘We’ve been coming historically and successfully to Svalbard, our guests experience it well and it’s a very positive destination for the expectations and the delivery.

‘But we are now facing difficulties when we want to plan our presence in Svalbard – the restrictions coming up, which have been coming up for a while now.

‘It’s the risk of not knowing, the fear we may need to change [itineraries] which is preventing us from planning in the way we would want to.’

The line is currently working on its 2025 programme, but now questions ‘what will happen to summer 2024 itineraries we launched’ given the tightening of restrictions creating ‘all these question marks.’ 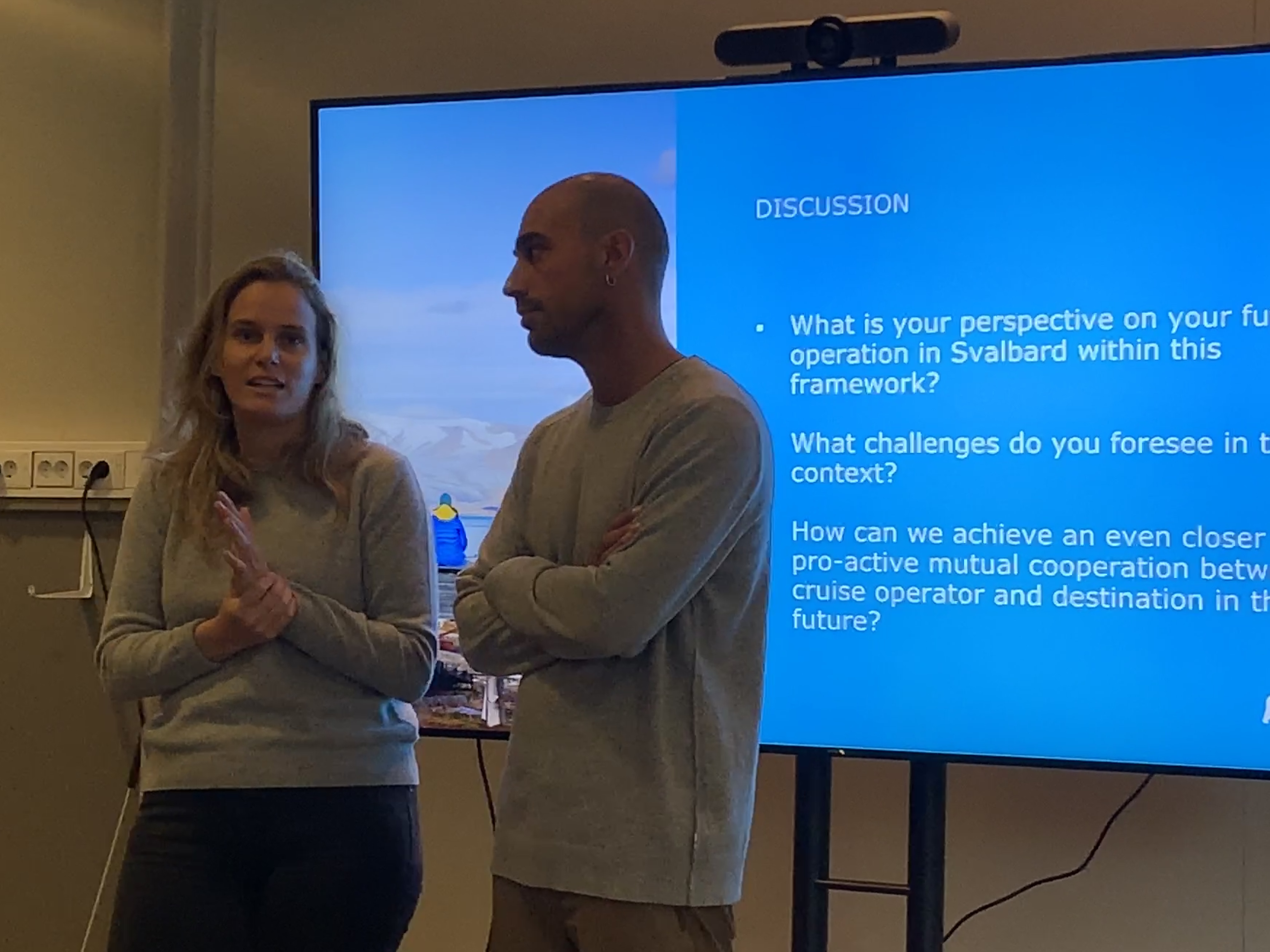 Beáta Szablics, destination experiences lead, Explora Journeys added that while Svalbard does not currently feature in the new cruise line’s itineraries, it ‘may look into future possibilities of coming to Svalbard,’ regulations permitting. Explora’s first cruise ship, Explora I, launches next year and will have capacity for 900 passengers. Szablics appealed to Svalbard’s public cruise committee to ‘bridge this gap’ that will prevent more people experiencing the Arctic destination, asserting, ‘I don’t want passengers to miss out.’ 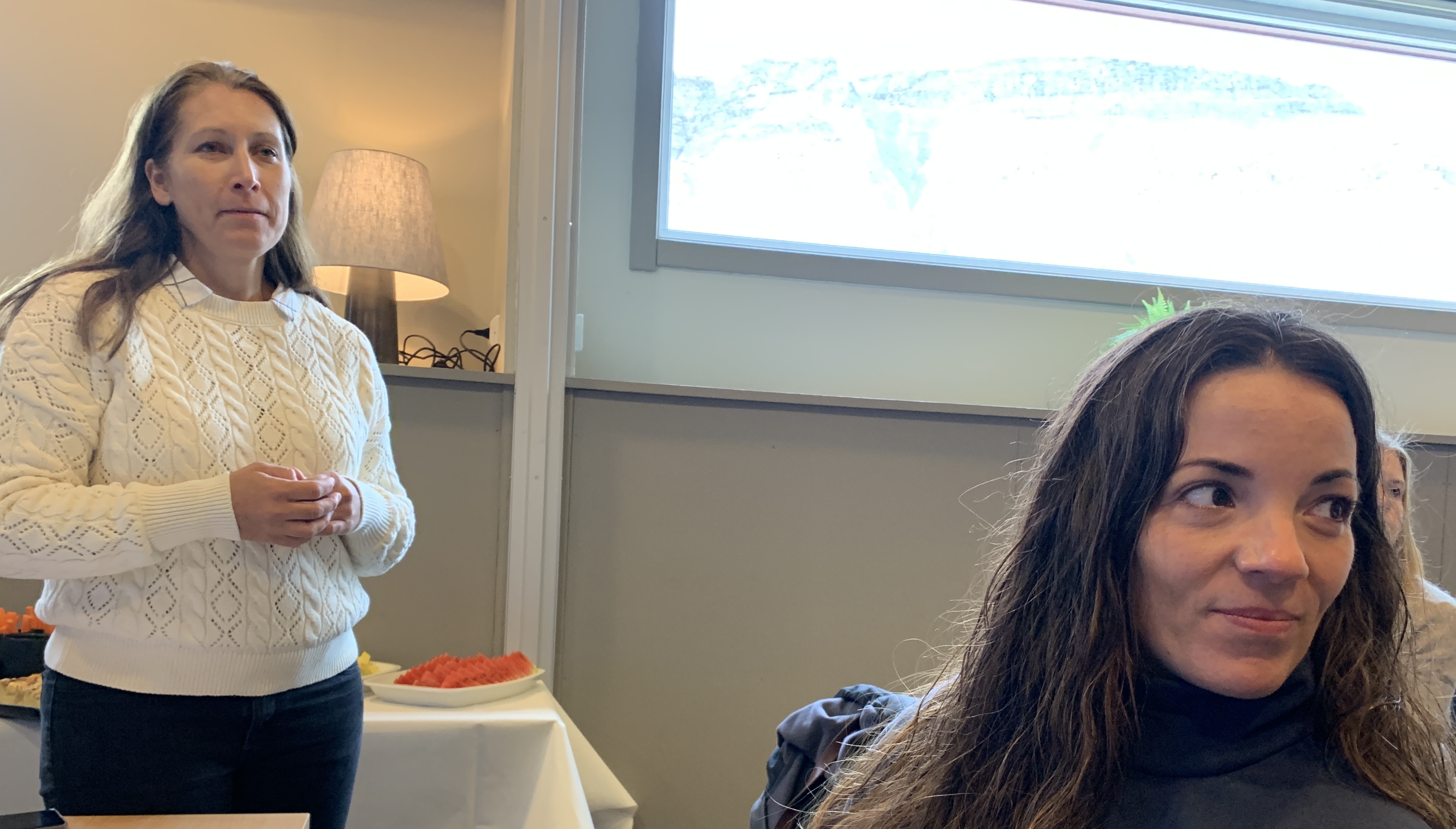 The key proposals that would impact on cruise lines includes Norwegian authorities setting a limit of 500-750 people onboard cruise ships sailing in Svalbard’s waters. Ronny Brunvoll, CEO, Visit Svalbard explained that the possible measure was for safety purposes, citing the volume of rescue services needed in March 2019 when Viking Sky lost engine power in a storm in Hustadvika off the west coast of Norway.

The deadline for the public hearing is September 15 with cruise lines invited to offer their insight by that date.

‘It will undergo a hearing process, it’s a proposal,’ asserted Cruise Norway CEO Inge Tangerås on the measure, expected to come into force 2024-25. Responded Brunvoll, ‘Even though there’s a loss in income, this will definitely be passed. From a local side, we support the 750 limitation from a rescue and preparedness perspective… it’s one ship, one risk, that’s the logic behind it.’

The Norwegian government has additionally proposed changes to the Svalbard Environmental Protection Act that would see a maximum of 200 passengers permitted in protected areas.

Regulations for safety in the field, which relates to the certification of guides, could also replace Tourism Regulations. The deadline for public hearings took place in May with the final decision yet to be announced.

In January, a total ban of heavy fuel oil (HFO) in seas around Svalbard was introduced. Then, earlier this year Longyearbyen rebranded itself a Sustainable Destination – a label given to travel destinations in the Nordic region with a focus on sustainability, which are evaluated every three years based on criteria.

To continue enhancing its reputation for sustainability, the archipelago is working to make sure the necessary infrastructure is in place to limit pressure from large pax groups, plus working to increase the number of sustainable labels and certifications belonging to the destination.

It is working additionally on defining the maximum number of cruise arrivals by pax and ship throughout the season, and in collaboration with the port authority, continuing to map environmental challenges linked to cruise calls. In 2025, the actions will be measured.

‘Svalbard is not made for scooters or segways, it is for bicyles only,’ said Eva Britt Kornfeldt, cruise manager at VisitOSLO who works closely with Visit Svalbard, ‘…and we don’t like company branded tours.’

She went on to say that ‘Another kind of cruise tourism in Svalbard than what we’ve seen before’ is coming and urged expedition cruise lines, ‘to consider supplementing the cruise by a longer stay in Longyearbyen’ that veers away from dependency on charter flights.

On the volume of cruise ships at the port, she appealed to cruise lines to give more notice when they are arriving in Longyearbyen. ‘We need to spread you out thinly throughout the week…not to compete with 10 others in the port,’ she said, ‘we need your reservations as early as possible.’

AIDA Cruises is among the lines calling at Longyearbyen in 2023, arriving in mid-May – a month earlier than this season. The line had been planning an overnight in Svalbard, topped with overnight shore excursions and Jana Valentine, supervisor, shore excursion programme, was ‘devastated’ the plans did not come to fruition. Therefore, when it comes to being green, Valentine is quick to express compliance. ‘We are always keen on sustainability, we are made up of 99% Germans onboard, they are aware of the environment and sustainability and keen to keep destinations green,’ she remarked. ‘We have lectures onboard preparing passengers for what’s coming up and the fragile nature.’ Asked by Kornfeldt if the line might consider her ‘dream’ for Longyearbyen’s community guidelines to be shown in cabins and on screens, Valentine’s response was, ‘We can definitely work on it.’

Brochet conceded, ‘We have been focussing on carbon emissions, it’s been taking the most of cruise lines’ energies. I think now we will have enough people and staff and time allocated to look at social and governance.’ She mentioned the potential of developing ‘a subteam within the itinerary planning department’ that would focus on wider issues connected with communities.

The Visit Svalbard masterplan (‘Destination Svalbard Towards 2030’) states that the goal of the destination is to prioritise passengers with the smallest footprint and highest value creation. Cruise-related activities will be subject to the same sustainability criteria and principles as land-based tourism, and sustainability criteria (economic, social and environmental) will be measured separately for conventional cruises and expedition cruises.

‘We do conventional cruising, the same as AIDA [Cruises],’ commented Hans Lind, director – itinerary planning, Norwegian Cruise Line. ‘We’re coming back for the firsttime next year, and for three overnights with Norwegian Star. We have one ship from Oceania Cruises, Marina, bringing 1,200 pax and we have three overnights planned.’

He continued, ‘I think we will have more if the 750 pax and crew limit doesn’t go through. We don’t have any expedition ships, so we will be out.’ 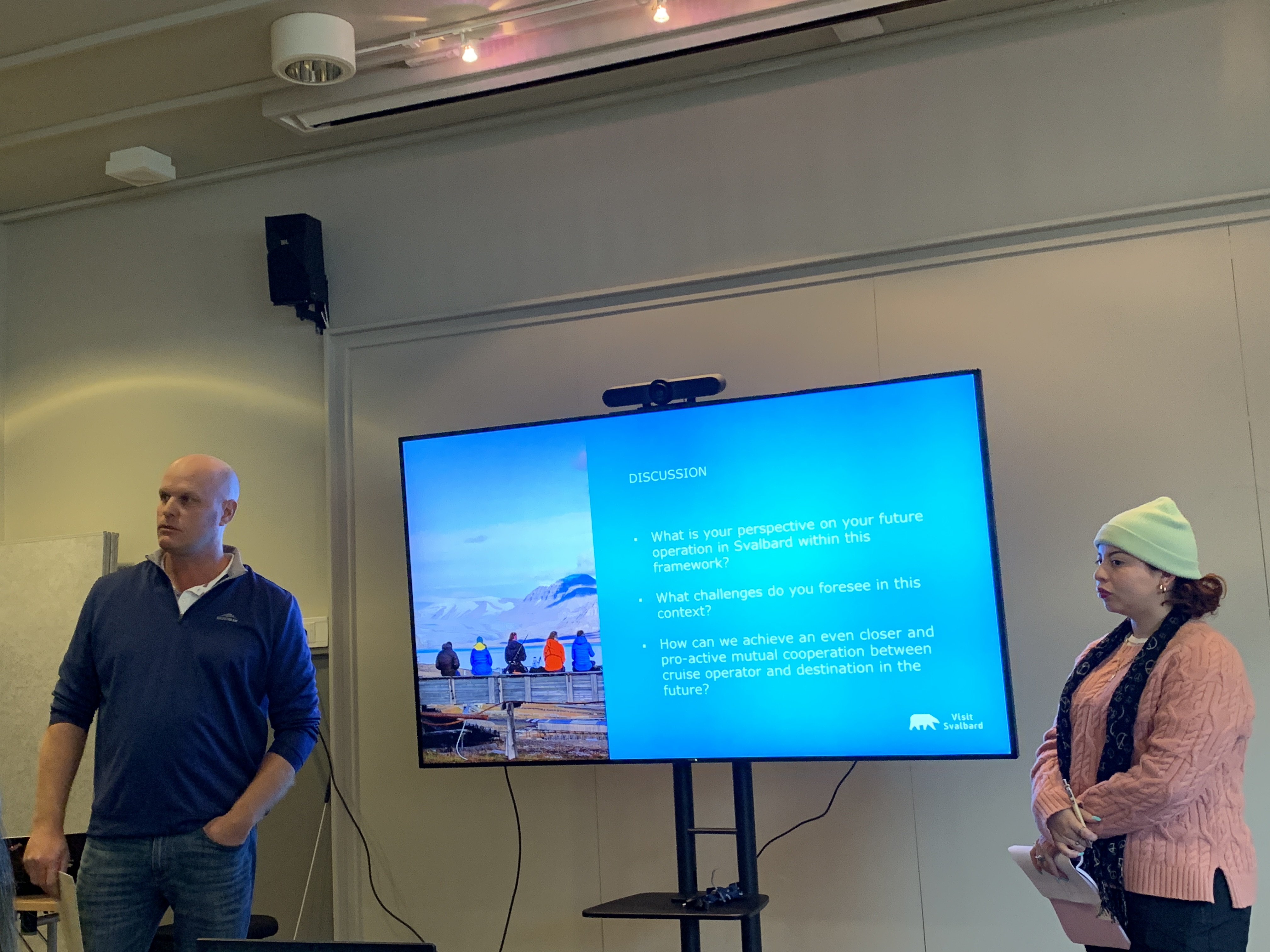 A ‘big challenge’ perceived by Lind would be ‘local people being against cruising.’ He said, ‘Guests will not have a good experience and won’t feel welcome.’

The cruise lines took the opportunity to address further areas of concern during the meeting. Brochet’s assertion that the shortage of pilots for landings on the west coast is ‘a red flag’ was met with assurances by Longyearbyen’s harbour master Kjetil Braten that the number of pilots is increasing and ‘will be ready for the west coast next year.’

‘Next year we are doubling turnarounds [and] there will be three turnarounds here with our new vessel. Germans are willing to change their way of travelling to visit Svalbard.’ Her area of concern was in relation to charter flights: ‘We will be increasing calls, year after year, and we are fine with the new requirements as we have 200 pax, we can work with AECO restrictions and our ships meet environmental standards. There is one problem: we come here with charter flights. Maybe we can fit the 200 pax in Longyearbyen for a pre- or post- cruise programme. It is worthwhile [for the] history, and how the local community lives… ‘ She went on to deliberate involving the local community more with Mystic Cruises.

With its 152-passenger capacity vessels and latest environmental technologies onboard, there is ‘no concern on capacity or pollution issues’ when it comes to Swan Hellenic, according to its senior manager, destinations management, Daniela Sordi. Instead, she is eager to ensure its eight turnarounds with SH Vega and SH Minera in 2023 will run smoothly. ‘We are still trying to figure out how to do this,’ she said. ‘This summer, we had to change our itinerary as we were originally meant to go to Russia. We couldn’t find a charter flight [to Svalbard] so we had to switch to Tromso.’

And, she adds, ‘We don’t want to put passengers in any available hotel,’ as she stressed the importance of a routine pattern of turnaround days that does not clash with too many other cruise calls. Kornfeldt responded firstly, ‘This summer has been hectic with charter flights,’ and to Sordi’s second point, said, ‘To have 8-10 ships here on the same day is not working for anyone. Better planning and coordination is absolutely key.’ 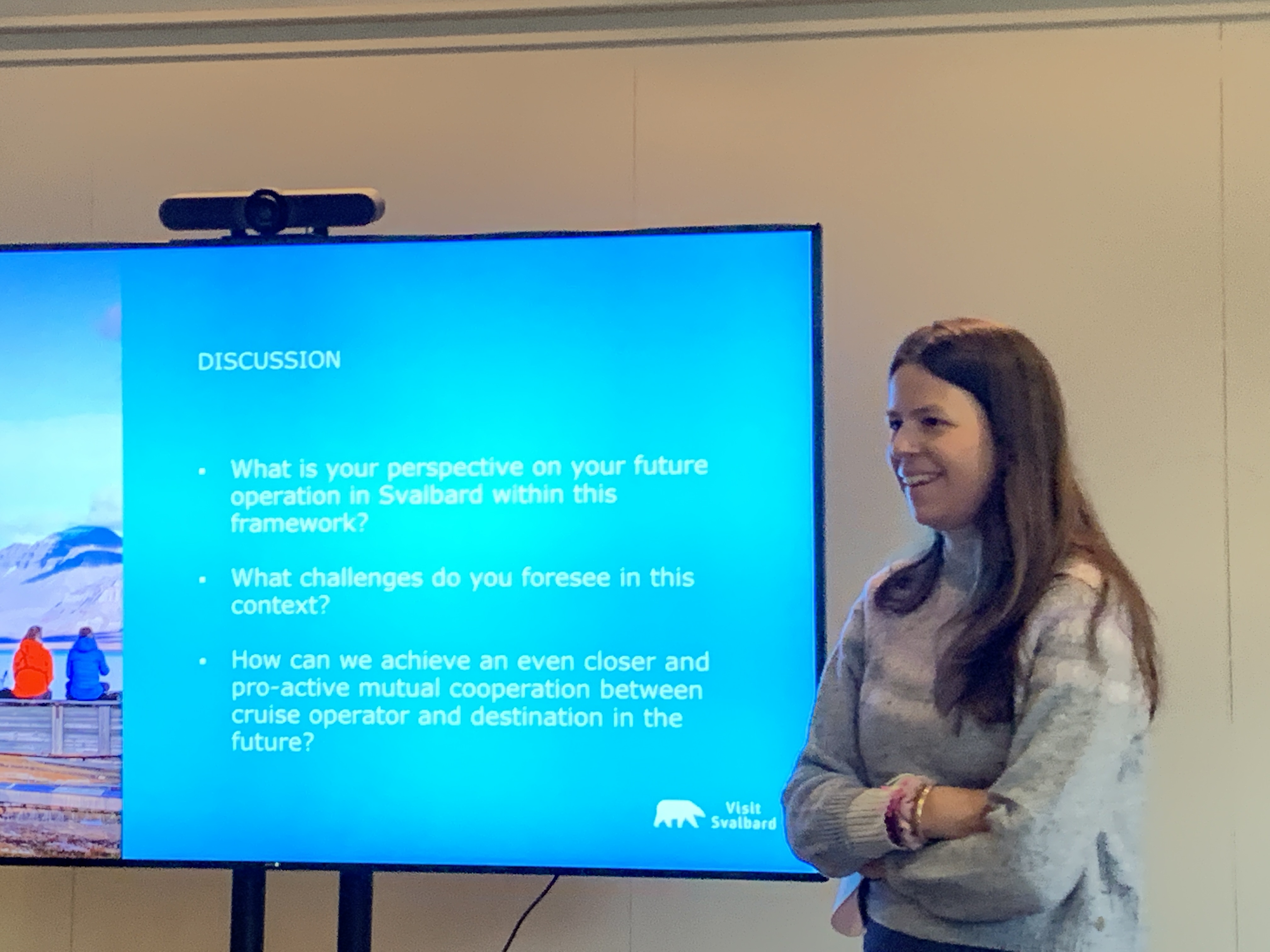 There are currently on 10 buses on Svalbard suitable for cruise passengers, and most excursions depend on buses.