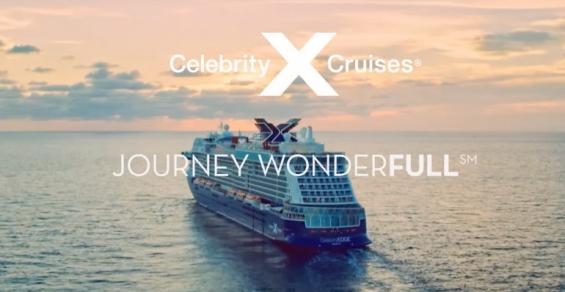 For the brand, the campaign – which already launched in the US in early September – is the largest of its kind in the UK & Ireland and can be seen in public spaces, including the retail hubs of London Westfield, Bluewater, Birmingham New Street and Manchester Arndale.

‘This is another huge moment for our brand, and our market, as we build back stronger following a successful season of luxury staycations this summer,’ commented Jo Rzymowska, VP and MD, EMEA, Celebrity Cruises.

She added, ‘…the Journey Safe, Journey Wonderfull advertising campaign, echoes what our guests and partners have been telling us: how ‘Wonderfull’ it is to be meeting again on the ocean; visiting the world once more, reconnecting with friends and family, and meeting new people and communities…’

To grow bookings this autumn, the campaign is supported by ‘the fullest and most flexible offering for travel partners,’ according to a Celebrity spokesperson.

It includes airfare deals and cruise savings with up to 20% off cruise fares throughout October -it follows the instant booking bonus available to agents through September.

An enhanced Celebrity Rewards programme, fresh Celebrity Moments campaign plus a suite of marketing tools and resources on Celebrity Central – including a new Europe marketing kit – will also be at agents’ disposal.

The line will have welcomed more than 150 agents onboard its ships by the end of the summer season, following its June restart in Europe. These have sailed from Southampton on Celebrity Silhouette, with others set to visit Greece, Italy and Spain on board Celebrity Apex this week.