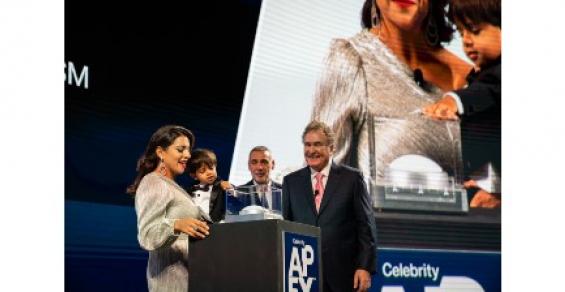 Holding one of her young sons, Reshma Saujani — founder of the nonprofit Girls Who Code — officially named Celebrity Apex during festivities at Port Everglades.

Tuesday’s naming was first planned for March 20, 2020, in Southampton but repeatedly delayed due to the pandemic.

‘Celebrating Celebrity Apex is certainly long overdue and it’s a day I have been waiting to celebrate for quite a long time — 581 days, to be exact,’ Celebrity Cruises President and CEO Lisa Lutoff-Perlo said.

She called Saujani a ‘trailblazer’ who ‘encapsulates what Apex stands for: pushing the boundaries of what’s possible, challenging stereotypes and making everyone feel included.’

Lutoff-Perlo joined the godmother on stage in the ship’s theater, along with Richard Fain, chairman and CEO, Royal Caribbean Cruises Ltd. 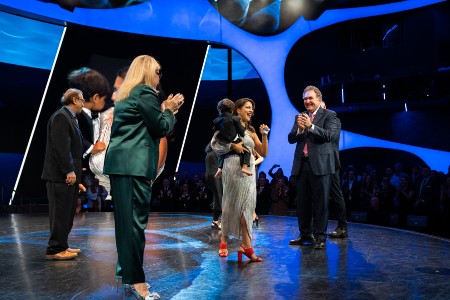 The hundreds of guests included local dignitaries from the cities of Hollywood and Dania Beach, representatives of Port Everglades, US Customs and Border Protection, US Coast Guard, Broward County Sheriff’s Department and Broward County Fire Rescue, along with media.

Celebrity Apex had operated a short run of Greek Islands sailings in the summer and, following the naming festivities, embarked on its inaugural US cruise.

The ship will alternate Eastern and Western Caribbean itineraries to destinations including Puerto Rico, St. Thomas, Belize and Grand Cayman, among others.

Girls Who Code programming at sea

As part of Saujani’s work with Celebrity Cruises, Girls Who Code will collaborate to offer educational coding programs as part of the Camp at Sea S.T.E.M. experiences aboard Celebrity Apex and Celebrity Edge. Children 6 to 17 will be able to design and develop two modules based on basic computer science and coding modules covering topics within the marine life and bioluminescence fields.

Saujani is a lifelong activist who became the first Indian American woman to run for US Congress in 2010. Her viral TED Talk and international bestseller ‘Brave, Not Perfect’ sparked a worldwide conversation about how girls are raised and inspired women to ‘fear less, fail more and live better.’

She recently founded the Marshall Plan for Moms, a campaign to put women at the center of the US economic recovery.