Azamara sale goes under the microscope 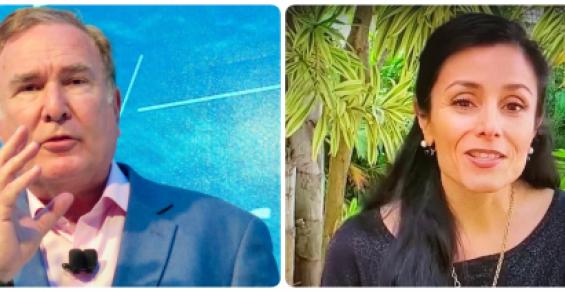 Sycamore Partners' acquisition of Azamara is 'good for us and good for them,' Royal Caribbean Group's Richard Fain told Seatrade Cruise News.

In an exclusive interview, the chairman and CEO told how the deal came about and said Sycamore’s ‘astonishing amount of due diligence’ affirmed the brand’s appeal and the pent-up demand that will fuel leisure travel’s recovery.

Fain also expressed pride in how Azamara had differentiated itself, giving a great deal of credit to former President/CEO Larry Pimentel for the destination immersion focus.

‘The team executed that brilliantly and has continued to refine the concept,’ Fain said. ‘As others copied, they evolved. They always stayed a little bit ahead of others.’

But with the pandemic, Royal Caribbean Group assessed its portfolio and ‘made some hints in the market about willingness to look at things and [Sycamore] approached us several months ago.’

Fain wouldn’t say if there were other suitors and doesn’t know if Sycamore looked at other cruise brands.

Why this private equity firm — whose investments include famous apparel brands, department stores and office supplies — would want to get into cruising now, Fain surmised ‘a lot of people are looking at leisure travel, something with a tremendous amount of pent-up demand.’

2020 and 2021 will be ‘awful years’ but then the market will recover very quickly and move on, he said. The pandemic was a ‘black swan event. A lot of investors don’t see this as a great financial meltdown. Banks have remained solid. Liquidity has been high. It’s just that temporarily, people can’t travel.

‘I think Azamara will do very well under Sycamore,’ Fain said.

RCL shares rose about 1% on Tuesday when the $201m deal was announced.

The group has mixed feelings, the Royal Caribbean chief added, since ‘we have an extraordinarily loyal set of employees and there’s a sadness on both sides about that.’

One of those employees, 21-year veteran Carol Cabezas, has been Azamara’s COO the past three years. She’s now promoted to president.

‘We recommended her to Sycamore,’ Fain said. ‘She’s done a tremendous job in a very trying period … Running a cruise company in this environment is incredibly challenging. She has maintained the enthusiasm of the team. She has kept her eye clearly on the long-term future, my measure of success. I think she’s going to do a great job.’

‘We have a great future’

Cabezas spent Tuesday assuring loyalty members and other stakeholders the future is bright.

In a video message to loyalty guests, she said the sale provides opportunity to rapidly expand Azamara’s destination portfolio and otherwise it will be ‘business as usual,’ adding: ‘We have a great future together.’

The brand won’t change ‘unless it’s to deliver more value. We want to continue delivering the same kind of authentic, immersive, friendly genuine service that enables connection and creates once-in-a-lifetime experiences for our guests.’

The fleet carries roughly 65,000 passengers a year and the majority of those stay loyal.

‘It’s clear our loyalty members are enamored with the brand,’ Cabezas said, so that’s something Sycamore could get behind while Azamara’s size gives upside to an investor.

She called it premature, though, to talk about additional ships.

Cabezas also reassured travel partners who were ‘quite apprehensive’ — folks like Vacations to Go’s Emerson Hankamer, World Travel Holdings’ David Crooks and Cruise Planners’ Michelle Fee — that the Azamara team remains in place and the product and relationships with distribution partners won’t change.

‘We didn’t see this coming, but after a year like 2020, nothing surprises me, and travel brands will need to make smart business decisions in order to survive,’ reasoned Fee, CEO and co-founder of Cruise Planners.

Cruise Planners COO and co-owner Vicky Garcia said the call from Cabezas left her feeling confident there will be a smooth transition.

‘We have not had many client questions yet regarding this recent news,’ Garcia added. ‘We know luxury and small ship cruising will continue to be a popular, especially as the industry makes a comeback, and we have confidence in Carol and her team and look forward to what the future holds for the Azamara brand.’

Employees needed reassuring, too. Cabezas, who’s spent her entire career at Royal Caribbean Group, understands. She had expected to be with the company until retiring.

‘But I also see the tremendous prospects that are coming to this brand, and I’m committed to it. I pour my heart and soul into it.’

She conveyed to the approximately 100 shoreside team members and to the ships’ executive teams  that ‘Sycamore knows their value … They know all the things guests say about our crew. I assured [employees] they are an extremely important and valuable part of the team we want to keep together.’

The deal is expected to close in 60 days.

Azamara will remain at Royal Caribbean’s PortMiami headquarters for an undetermined period, Fain said, though everyone currently works from home. Cabezas will lead the search for a new Miami office when the time is right.

Since Azamara currently benefits from shared services in financial areas, IT, marine and supply chain, new teams will have to be created to function as a standalone. Things are being prioritized, and some will take longer than others — building dedicated technology, for example, could take a year or two.

The brand is currently paused through April 30 and all three ships are in layup at Glasgow. Cabezas said Sycamore is committed to sailing only when it’s safe and in alignment with port and destination partners and health authorities.

Azamara hopes to resume cruising in Europe since its ships are there and North American itineraries aren’t scheduled until the end of November.

Unlike the US, where itineraries are capped at seven days, there is no such stipulation in Europe. Anyway, Cabezas said Azamara’s summer routes are on the shorter side: seven, eight and nine days, compared to longer winter sailings that can stretch 15 or 20 days.

‘…While there’s going to be a lot of heavy lifting over the coming weeks, we’re up for the task,’ she said. ‘We’re really excited to keep the great relationships with all our partners out there and to continue to deliver the product our guests know and love.’