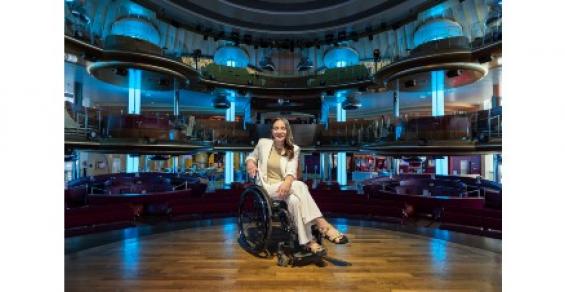 Vogel won two gold medals and a bronze in cycling at the 2012 and 2016 Olympic Games and was an 11-time UCI world champion before being paralyzed during a training crash in 2018.

AIDA said naming ceremony guests can expect a fantastic light show that will bathe AIDAcosma and the evening sky in a sea of colour. Some 300 luminous drones and beam lights will make the ship sparkle.

Afterward, AIDAcosma will sail at around 11 p.m., making a lap of honor in front of the Elbphilharmonie concert hall. Superstar DJ Alle Farben will be onboard at the Beach Club stage to present a 60-minute show for passengers on the christening voyage.

The naming will be broadcast live at www.aida.de/taufe and AIDA’s YouTube channel starting at 9:30 p.m. local time.

Passengers on the April 9-23 christening cruise to Palma de Mallorca will be treated to culinary delights and special entertainment.

Also on board will be Reiner Meutsch, founder of the Fly & Help foundation. From April 12 to 17, the globetrotter will present the show ‘Abenteuer Weltumrundung’ (Around the World Adventure) and give an account of his world trip and numerous aid projects. Together with Fly & Help, AIDA Cruise & Help, as a longstanding partner, will organize a raffle to support the construction of schools in emerging and developing countries.

Onboard entertainment will be provided by pianist Joja Wendt, AIDA guest artist Wayne Morris and comedian Niko Formanek. New in the Theatrium is the show ‘Alles Liebe,’ in Studio X the participatory game ‘Wer weiß denn sowas?’ and in the Time Machine restaurant the show ‘Wir reisen in die Zukunft in das Jahr 2025.’

Cruises from Palma and Barcelona, then Dubai

From April 23 April to Oct. 15, AIDAcosma will sail weeklong cruises from Palma and Barcelona. After that, the ship will redeploy to Dubai for a winter season of seven-day cruises.