On August 28, the Cruise Norway fam trip touched down in Svalbard, venturing up the mountainside above Longyearbyen airport to Mine No.3 for a lecture on Svalbard’s rich history as a mining community and dined on soup typical for the area. Donning overalls and a hard hat, they explored below ground – a hands-on experience that demonstrated how technology and safety have evolved over the years in mining, allowed the group to try their hand at manoeuvring equipment once used by the mining community, and dared them to venture into a narrow tunnel.

AIDA Cruises offers the experience to its passengers, with its shore excursion programme supervisor Jana Valentine stating, ‘I don’t have any doubts [about its suitability for passengers] because our mainly German guests are super fit and they like tours which are outdoors, which includes walking and active programmes. I think they would crawl into the tunnel. Not all of them, but a few, most probably.’ 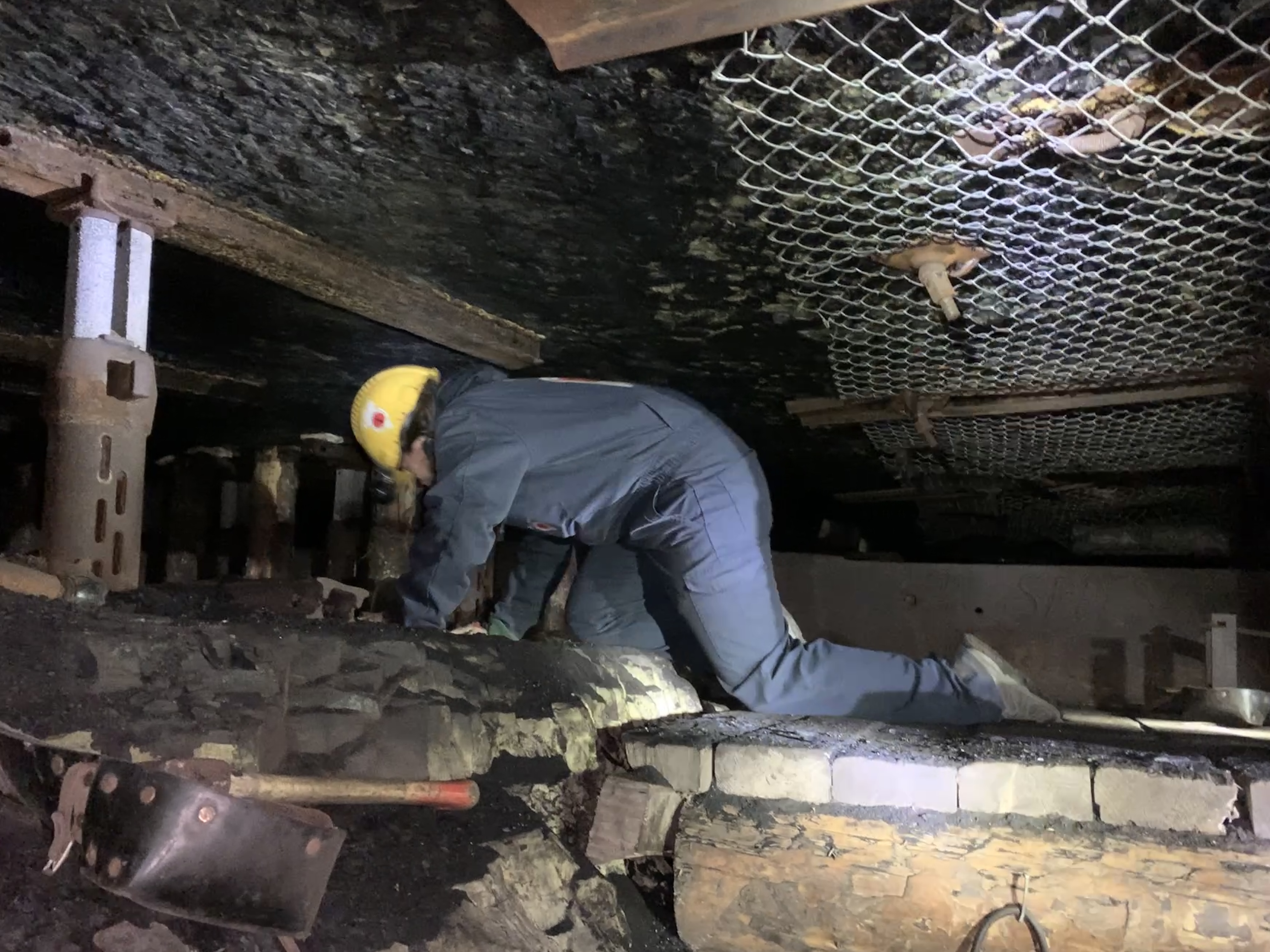 The experience lasts three hours and operators receive a discount when booking directly with the mine.

The group were shown the steel container containing security copies of the Nordic seed collection and the Global Seed Vault is situated yards from the mine. The gateway to the Arctic World Archive – designed to withstand global disasters and holding manuscripts from the Vatican Library, scientific breakthroughs and contemporary cultural treasures – was also visible.

After a guided tour of the settlement by coach, the participants set out for Advent Valley for an afternoon filled with husky dogs and the chance to learn about their behaviour from experienced husky owner, Audun Salte. Every day, his 100+ dogs at Svalbard Husky AS run outside the yard and working alongside his veterinarian partner, he is vocal about unethical husky owners and against keeping dogs in cages. ‘We explore the connection between dogs and exploration,’ noted Salte, ‘a lot of our products… are about going out with the dog and having fun with the dog.’

The facility is ‘expanding ourwards, building a bigger running yard for the dogs’ with the addition of a dining venue planned for winter that will allow cruise passengers to combine Svalbard Husky-organised activities with refreshments. 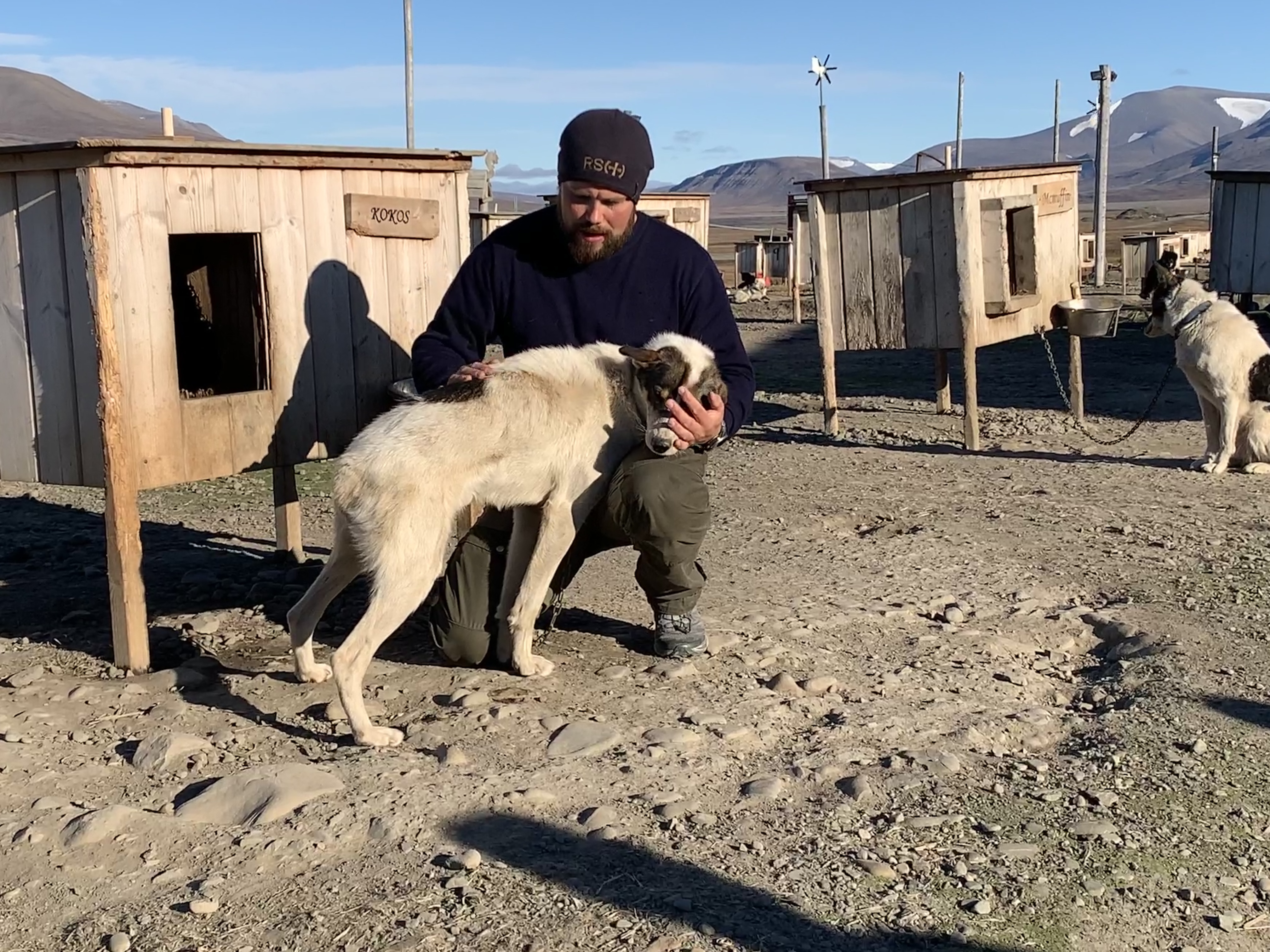 Cruise passengers are typically met for dog sledding at the pier but, says Salte, ‘more and more people are choosing only to visit and spend time with the dogs.’

Continued Valentine, ‘I’m always trying to find something new and something great, and with Audun I was totally impressed that he said it isn’t the most important point that guests are happy, but that the dogs have a good life. I always try to consider sustainability, and being here and seeing Svalbard for myself, you get a totally new perspective and respect for nature, and therefore I think destinations like Svalbard need to be protected. It’s great to find sustainable shore excursions, which are also good for the locals.’

Svalbard Husky is currently working on an initiative to transform bio-gas from the animals’ waste.

The northernmost brewery in the world

A trip to the northernmost brewery followed, with a story connected with each beverage, its founder and how it came to fruition shared with every mouthful. Background on alcohol consumption on the archipelago and a concise step by step retelling on how the beverages are made accompanied the tasting. A glass wall in the intimate venue where tastings are held enables visitors to watch over the production process in action.

The venue is suitable for 50 passengers at a time, and the maximum number served in a single day is 300 – a figure reached this summer. Locally made food can be served to cruise passengers during the tastings or tastings can be carried out at alternative dining venues in Longyearbyen to suit need. 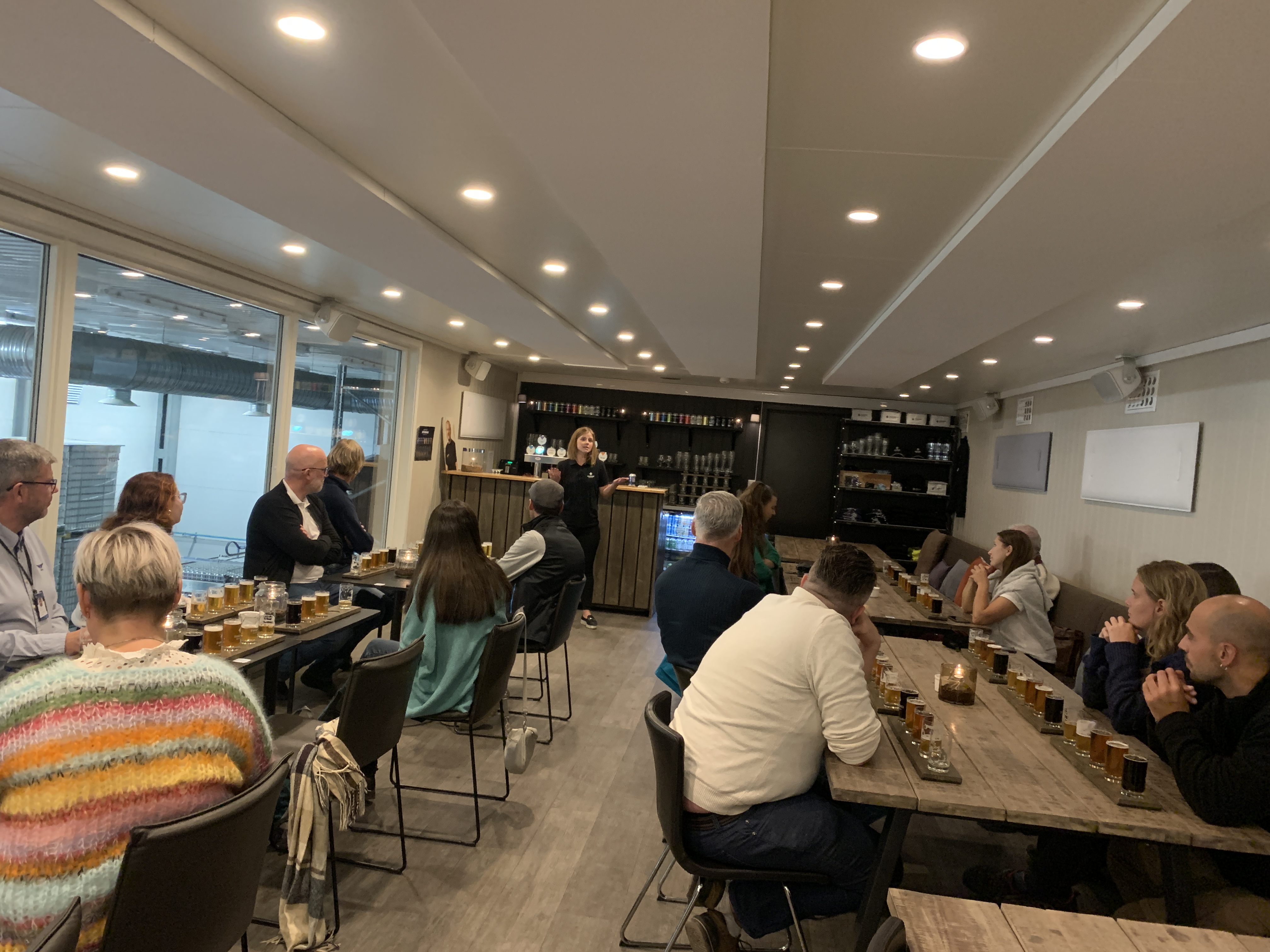 Glacial water, malt from Finland and hops from the US make up the ingredients, with 2,000 cans packed every hour. The alcohol is served onboard Hurtigruten and AIDA Cruises vessels, among others, to support local trade.

During the visit, cruise lines were shown a presentation by founder of Arctic Husky Travellers and veteran of multiple dog sledding trips to the North Pole, Tommy Jordbrudal, who painted a picture of his experiences with huskies – and encounters with polar bears.

A dip in the arctic waters outside of Port Longyear against a backdrop of snow topped peaks followed a visit to the recently opened SvalBad floating sauna. ‘They’re very popular, people have got onto the Nordic, floating saunas in Oslo, too,’ stated Kornfeldt of the concept’s growing popularity. Beverages and a light snack can be served to passengers during the activity. 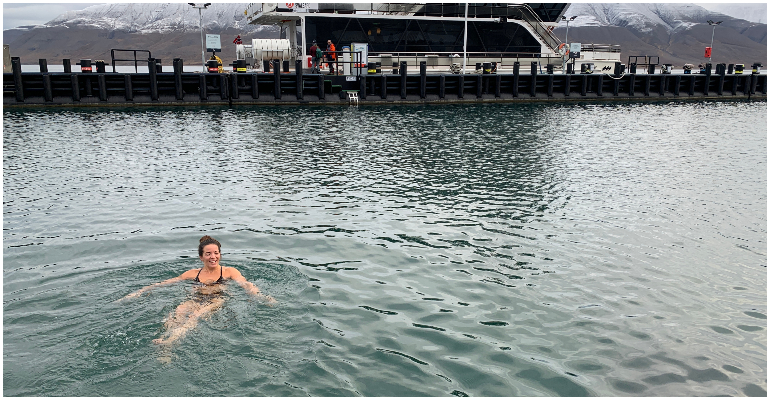 Svalbard Museum is open 10-5pm year-round except Christmas Day and suitable for approximately 40 cruise passengers at one time, according to Saskia Heynecamp who works at the museum and helps coordinate and deliver guided tours. The venue relocated in 2006; now less than 2km from Port Longyear, it reaps the rewards for being next door to the Norwegian Polar Institute and The University Centre in Svalbard, benefitting from new exhibitions showcasing latest research like the permafrost exhibition currently on display.

Natural history, ecology and cultural traditions through the ages are curated at the museum. ‘We work strongly with guides [coming with passengers]. It is useful because the museum is only in English and Norwegian,’ remarks Heynecamp, who is enthusiastic at the concept of cruise lines using local tour guides who have sound knowledge of the museum. ‘An hour is a good time to be here for passengers – but ideally 1.5 hours.’ Early opening options are available for operators. The museum shop sells jewellery, art and a selection of handmade goods produced locally, with purchases supporting the local community. 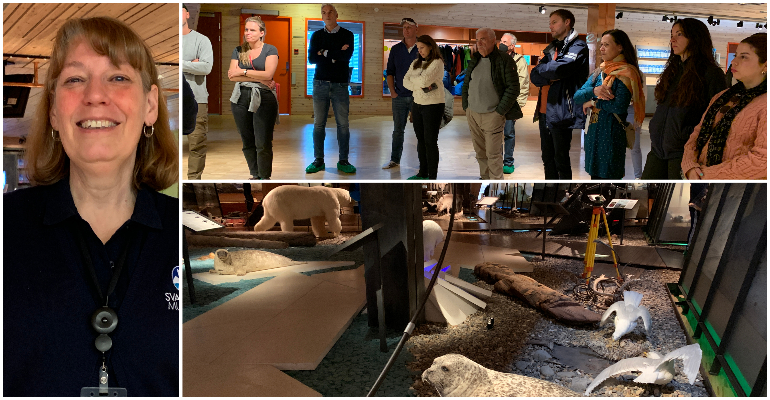 Prior to Svalbard, the fam trip assembled in Oslo for a whistlestop tour of the city delivered by Oslo Guide Bureau. Operational since 1996, it has 200 guides and are ‘always dependable and on time,’ according to one guide Marit Utaker.

A brisk walking tour of the city centre took in the Opera House and Munch Museum just a stone’s throw from the port before a sightseeing car ride past the cathedral, Norwegian Parliament, Oslo University, the Royal Palace and the Akershus Fortress and Castle. The party were then offered a moving tour of the Holocaust Museum – today filled with an exhibition about hidden racism – and shown the secret bunker of Nazi sympathiser Vidkun Quisling during WW2 with a 45 minute tour being most suitable for passengers.

‘Oslo is attractive, it is the capital of Norway and it’s a destination people know,’ said Hans Lind, director itinerary planning, Norwegian Cruise Line Holdings which has Oslo on its itineraries through to 2025. Attractions like the Holocaust Museum and others are ‘very attractive for the clientele onboard Regent Seven Sean Cruises and Oceania Cruises’ in particular, with Norwegian Cruise Line’s ‘younger crowd’ instead frequenting restaurants or participating in family-oriented activities.  Michelle Sanchez, shorex coordinator – Caribbean, Norwegian Cruise Line reiterates that Oslo’s many museums are especially suitable for mature cruise travellers.

Passengers can expect to spend up to 45 minutes at the museum, which can be combined with Huk beach less than five minutes away by vehicle.

Together with hiking trails and beaches, Bygdøy Peninsula near the city centre is also enriched by a handful of museums. There, fam trip participants had the chance to encounter the country’s oldest boat at the Norwegian Maritime Museum before a unique tour of the Fram Museum, housing Fridtjof Nansen’s polar sailing vessel, Fram.

A few metres away, the Kon-Tiki Museum houses the archives of Thor Heyerdahl – one of history’s most famous explorers – recognised by UNESCO for their contribution to world heritage. The original Kon-Tiki raft used to cross the Pacific Ocean and reed boat Ra can be seen, plus original artefacts from Heyerdahl’s travels including figures from Easter Island as well as a giant moai replica.

The venue’s trademark beverage, ‘Kon-Tiki Landing’ plus snacks were served during a 10-minute film documenting Heyerdahl’s adventures, with a longer, one-hour Academy Award winning version showing in the film room, which can hold 60 passengers. Lectures about Heyerdahl’s sea crossings, archaeological excavations and more are offered in the museum’s auditorium, which holds 55 passengers. Chances to meet Heyerdahl’s granddaughter or ‘go behind the scenes’ in the director’s office are also possible. The venue can accommodate cruise passengers outside of formal opening hours (10am-6pm in summer / 10am-5pm in winter) where pre-arranged.

Bygdøy is also home to the Norwegian Folk Museum, which can be reached by boat taken from the City Hall pier. 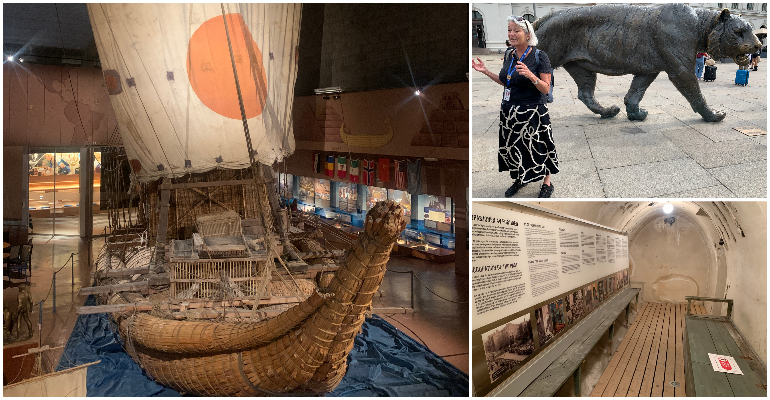