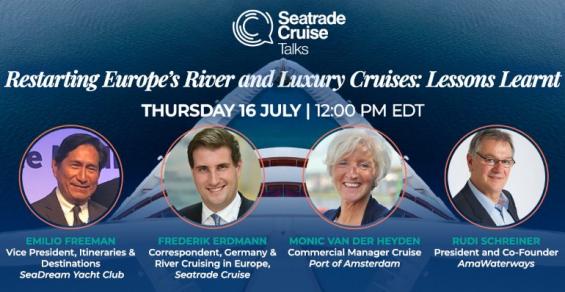 The first of AmaWaterways’ three new ships recently arrived in the Netherlands from Romania, the second is located in a shipyard in Amsterdam where construction has been delayed and the third is set to traverse the Nile next year.

‘I’m already working on new ideas and new designs for post-COVID times on ships’, explained Schreiner. ‘We are still moving forward with our plans.’

AmaWaterways’ AmaKristina, which resumed cruising in early July and is marketed for German-speaking guests, is anticipated to run until the end of October. ‘It’s a totally new experience, we’ve never done it before’, added Schreiner.

Nevertheless, he went on to add that – with the exception of AmaKristina – it is ‘likely’ that its August 31 start date for resuming the bulk of operations is likely to be further postponed this year and September cruising suspended. The decision is expected to come in late July.

‘We were, actually, to some degree, prepared for this’, claimed Schreiner during the discussion. ‘For the last six [to] eight years…I was always worried about some extreme [cruise] seasons – from terrorism, to political unrest, to low water with the climate changes.

‘I was also worried about such low water on the Rhine and Danube that we couldn’t possibly cruise.’

In view of coronavirus, Emilio Freeman, vp, itineraries & destinations, SeaDream Yacht Club and Schreiner both emphasised the practicality of small vessels with low passenger numbers, which allow easy access to well ventilated areas. ‘We encourage our guests to utilise the outside spaces that we have’, offered Freeman. ‘Every one of our meals, pretty much, is designed to be outdoors. It’s not just in aberration, it’s part of the game plan.’

He went on to say that SeaDream is ‘more of a yachting experience’ with passengers invited to dine and sleep on deck.

AmaWaterways’ AmaKristina usually carries between 150 and 160 passengers, but currently cruises with 60 to 65 people on board; face masks, fixed seating arrangements, Plexiglas shields in lounge areas, temperature testing and luggage cleaning are just some of the hygiene measures it has in place.

‘It seems like surfaces are not the most important part with COVID-19, it’s more the droplets’, said Schreiner. ‘So we eliminated singing on board for evening entertainment because that is a risky area and you cannot put a mask in front of a singer.’

Freeman explained during the webinar that the company decided to cruise the Norweigan coast four weeks after repositioning one of its vessels there to undertake crew training in the absence of operations.

‘We oversold on a couple of voyages’, Freeman said. ‘We’re attracting a new audience and expanding our base.’

Having ventured to Norway twice in its 19 year history, the country’s source market is relatively new to SeaDream which usually offers an itinerary that ‘follows the sun.’

SeaDream is currently following Norweigan guidelines for cruise operations and reviewing the ‘complex’ EU gateway guidelines. It plans to resume operations in the Mediterranean in late Summer.

The challenges in avoiding ports determining their own rules in recent months was explored by Monic van der Heyden, commercial manager cruise, Port of Amsterdam and chair of River Cruise Europe.

She added, ‘It went very well and very quickly, within a few weeks there was already a first draft of Standards.’ These include measures on hygiene, disinfection, social distancing and how food and beverage will be served.