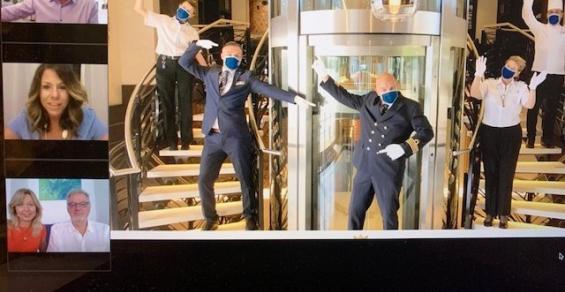 The busiest river is the Rhine, followed by the Danube, Schreiner said during an AmaWaterways webinar news briefing. France also has a good number of vessels, especially on the Rhône, and Portugal’s Douro has five.

One vessel — operating in Germany since July 5 — is AmaKristina. As earlier reported, this made AmaWaterways the first US-based river line back in service in Europe. It is carrying only Europeans, a new market for Ama, in a charter arrangement with German tour operator e-hoi.

Marketing started only in June and AmaKristina is booked to the end of October.

Still hoping Americans may be allowed in Europe this year but …

‘We still hope to get some cruising in by the end of this year but we’re not sure,’ Schreiner said about his company’s core North American clientele being able to travel. It depends on the virus getting under control stateside and the European Union giving the green light.

Since things are better in Canada, travel advisors have been lobbying AmaWaterways to consider European sailings just for Canadians. EVP Kristin Karst said it was debated but ruled out since there’s still uncertainty about borders and Canadians would have to quarantine 14 days upon returning home.

Most likely the first opportunity for North Americans to take a river cruise with Ama in Europe will be March 2021.

Schreiner said the line posted its strongest booking month ever in June, partly because travelers were rebooking canceled 2020 trips for 2021 but also because sales opened early for 2022. Typically that would not have happened until October.

‘Luxury travelers are looking for less crowded destinations and being close to nature,’ Karst said. She reported strong demand in 2021 for Lower Danube cruises, visiting destinations in Romania and Bulgaria.

Also next year, AmaKristina will transfer to the Rhône to meet growing demand for France, and the new 69-passenger AmaDahlia will debut on the Nile in September. It’s already 65% booked for the season, which Ama stretched by an extra month, through June 2022.

During this pause in operations, the company has kept up marketing efforts, with more than 1,000 virtual cruise nights and Sip & Sail cocktail hours, and 500 more to come shortly. Ama also runs Wednesday webinars and cranks out inspirational videos and other digital sales tools. Chief Marketing Officer Janet Bava said her entire team is dedicated to helping travel advisors.

Going forward, when customers book air through AmaWaterways, they’ll get a private transfer to the vessel for their traveling party instead of going on a motor coach, SVP sales Gary Murphy said.

If there’s a vaccine …

Schreiner was asked if there’s a vaccine for coronavirus, would ship operators require that for travel? He thinks the decision would likely rest with governments — perhaps certain countries would require it for entry.

In designing new vessels, Schreiner — an architect — is most focused on future dining facilities.

‘Will the buffet stay or go away?’ he pondered.

Most upscale restaurants don’t have buffets and in hotels they’re usually just at breakfast. In addition, spaciousness and wellness are key. Future vessels may carry fewer passengers, he said.

As well, Schreiner’s drive to reduce draft continues, and Ama has been very successful operating during low-water seasons in recent years.

The Netherlands government is now awarding premier docking spaces to river vessels with the most sustainable operations, and Schreiner said the entire Ama fleet has qualified.